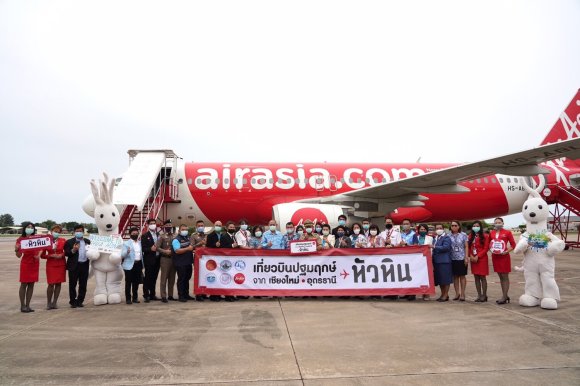 AirAsia recorded a strong recovery in passenger volumes in the last quarter (Q4) of 2020, notably in domestic carriage across Indonesia, the Philippines and Thailand.

Domestic numbers in Indonesia ballooned by eleven times quarter-on-quarter (QOQ), doubled in the Philippines and increased by 31% in Thailand.

Numbers at the original Malaysia-based AirAsia were weak in Q4, primarily because of interstate lockdown measures in October and November, but the carrier did see a strong rebound in December following the easing of restrictions. The Kuala Lumpur-based airline carried 834,934 passengers in Q4—down 90% year-on-year (YOY). Over the 12-month period, AirAsia ferried 9.1 million passengers, declining 74% YOY, while its RPK and ASK slid 78% and 74% respectively.

AirAsia Indonesia’s Q4 domestic numbers grew eleven times, while capacity tripled. Although more focused on international flying, domestic capacity has recovered to 93% of 2019 levels and AirAsia is hopeful the Indonesian AOC will return to normal domestic capacity by the end of Q1 2021.

Thai AirAsia was able to benefit from government travel incentives and as such its 2020 domestic capacity exceeded 2019 levels by 7%. In December 2020 alone it operate 116% of pre-COVID levels and Q4 passenger volumes passed the 50% threshold from 2019 figures. Over the whole of 2020, the unit was the least impacted operationally among AirAsia’s AOCs in the region. RPK and ASK slid 66% and 62% YOY respectively while passenger volume was down 57% YOY to 9.5 million— still a far cry from the 22 million in 2019.

In 2020, AirAsia shed its Japanese carrier, which filed for bankruptcy and went into liquidation in November. AirAsia also sold 32.67% of its stake in AirAsia India to Tata Sons in a deal worth $37.6 million.