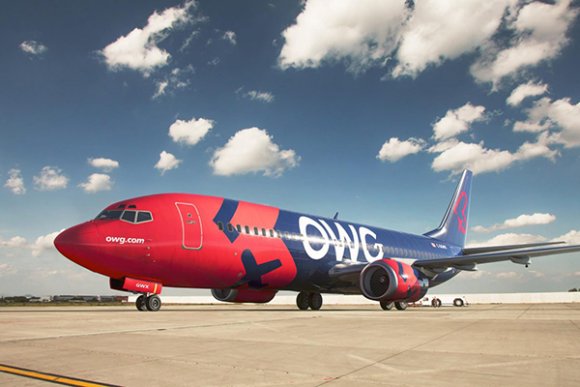 Marco Prud'Homme is the president of Canadian charter flight specialist Nolinor Aviation. Founded in 1992, the company offers air service to all regions of Québec and across Canada, the US and multiple other destinations around the world, including remote regions where gravel and ice runways are the norm. Marco became president in March 2020 after four years as VP.

Nolinor Aviation is behind the new Canadian carrier OWG, which stands for Off We Go. The Quebec-based startup has been in the works since 2018 and received authorization from Canada’s Minister of Transport in July 2020 to begin international services.

The airline, which has a fleet of three 158-seat Boeing 737-400s, operated a series of flights from Montreal and Toronto to Cuba in late December and January. Marco Prud’Homme, the president of Nolinor and OWG, explains more about OWG’s strategy.

Nolinor has historically specialised in providing charter services to the Far North, geared to the mining industry. Why did you embark on this change of strategy? Was it simply to diversify your operations?

OWG has been a project that we've been working on for the last three years. I would say 95% of our flights are going up north so we need to diversify our operations.

When the 737 MAX groundings happened, we were called in by Sunwing to do some replacement flights. Flying to sun destinations was something that was very alien to us, and we were under the impression that the operations would be difficult.

However, compared to flying to the Far North where it’s often -30 degrees and the weather is unforgiving, flying down south to Mexico or Cuba is actually pretty easy. This experience shows us that we might be able to do that type of rotation.

We were then approached by a tour operator in Montreal and Toronto that was looking to have a more personalized service. Given the Nolinor brand is known in Quebec for flying north, we thought it might be quite difficult to get people to fly with us on routes going south. That led to the creation of OWG, which is a younger, more dynamic brand.

You announced details of the OWG brand last July. What is the overall strategy for the airline and what has happened since last summer?

We started doing our first flights to Cuba in December, although the ongoing impact of the pandemic meant we were only flying once a week instead of the eight flights we originally planned. But our mindset is to find opportunities even in the worst situation.

We began surveying every passenger who flew with us to find out what could be improved, and we ended the current flight program with a 94% satisfaction rate. When we do restart flights, a lot of the initial operational problems will have been solved, so we’re very positive about the whole experience so far.

Our strategy has been not to tell people too much about what they can expect on our flights—we’re trying to manage expectations. As a result, people have been learning what our ‘high love’ business model means—and they’ve been happily surprised.

We’re not offering a legacy service, it’s very different from what you see now on regular airlines. I think we have a different mindset. We started with a blank page and decided to put ourselves in the shoes of somebody who is going on a vacation.

If you look back at the history of Norlinor Aviation, we've been in business for 28 years and our vision is long-term. We're not there to grab big parts of the market overnight and then go bankrupt.

What are your network plans once COVID-19 travel restrictions allow? Given the reduction in passenger demand, how will you gain a foothold in such a competitive market?

From Montreal and Toronto there are about four or five of the most popular vacation destinations in Cuba that we are targeting.

On those routes, we’re not there to cut prices—we're probably the most expensive flights around—but we're targeting people that are sick of flying on aircraft where there's no service. I think there's a market for that.

When it comes to airlines, everyone seems to forget that there’s a different need for a different type of passenger. So, in order to grab as much of the market, everyone has cut prices. We want to give people a better choice.

What demand for leisure travel do you expect when borders reopen?

It’s going to be very interesting to see how people will react. If you look at the last pandemic about 100 years ago, people emerged from a very gloomy situation and began living like there was no tomorrow. It was the ‘roaring 20s’ and I think something like that is going to happen.

People have spent so long at home—they’ve invested in their house or bought a new car—and they want to travel again. I really believe that there is huge demand and I think that 2022 in particular will be a very interesting year.

Although your fleet is grounded at the moment, do you expect OWG to add more aircraft?

Of the three 737-400s we bought, only two have been put online. We can use those aircraft to do eight to 10 flights per week. The third one will be a great backup once the market opens up again.

We all know the 737 MAX is coming back into operation and there are some good prices for aircraft. But I have the same payload with our 737-400s as with 737-800s and it costs me one third of the price.

Unless we have a customer that really needs that type of aircraft, I don’t see [there will be further additions] in the short-term.