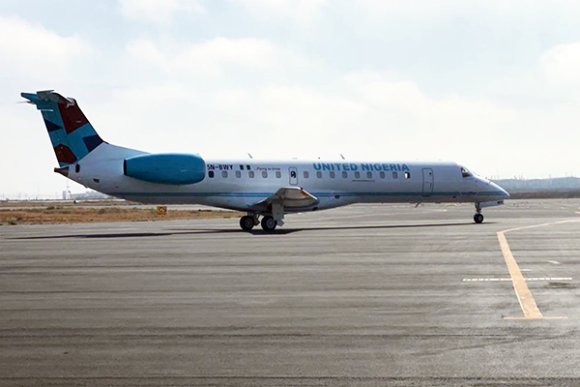 The carrier, which is based at Enugu Akanu Ibiam International (ENU) and has a fleet of four Embraer ERJ145 aircraft, operated its first flights on Feb. 12, with the inaugural service connecting Lagos (LOS) with ENU.

Booking is now available for a domestic network comprising five routes. As well as flying daily between LOS and ENU, the airline will operate LOS-Abuja (ABV), LOS-Asaba (ABB), ABV-ABB and ABV-ENU.

Owerri (QOW), Port Harcourt (PHC) and Warri (QRW) have been identified as destinations likely to be served in the future.

Speaking to The Guardian newspaper in Nigeria, United Nigeria chairman Obiora Okonkwo said: “You can see we have a base in Enugu and we have to consolidate, establish all our routes and then work on expansion.

“We want to expand beyond Nigeria, starting from the West Coast. We have a big plan.” Okonkwo added that the airline hopes to expand its network within three months.

According to data provided by OAG Schedules Analyser, there are 96,883 seats available in Nigeria’s domestic market this week (w/c Feb. 15, 2021), compared with 175,000 during the same week a year ago.

LOS-ABV is the busiest route in the country, currently accounting for about 31% of all weekly capacity. OAG’s data shows that United Nigeria will compete with seven other carriers on the sector, which collectively offer almost 30,000 weekly seats.

Dana Air is the largest operator, flying 5X-daily and providing 10,000 two-way seats. Arik Air is the second largest with 34X-weekly flights and 8,400 seats.

Among the five other operators of flights between Lagos and Nigeria’s capital Abuja is Qatar Airways, which launched flights to ABV in November 2020. The 3X-weekly route from Doha (DOH) via LOS uses Boeing 787 aircraft.

The launch of United Nigeria comes as another Nigerian start-up, Green Africa Airways, prepares to take to the skies. The LCC is currently working towards securing its AOC and hopes to begin commercial flights in the coming months.

The airline has 50 Airbus A220-300s on order and plans to operate domestic flights within Nigeria and then build a pan-African network.

Earlier this year, domestic airline Azman Air also unveiled plans for an ambitious growth strategy in 2021. The airline intends to add another A340-600, three 737-800s and five regional aircraft to its fleet.