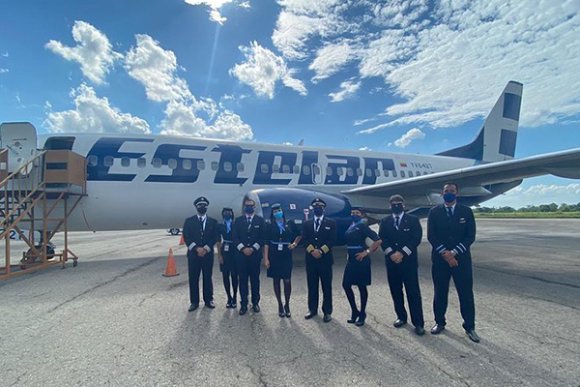 Miami-based Global Crossing Airlines Group (GlobalX) has signed a cooperation agreement with Venezuelan carrier Aerolíneas Estelar aimed at re-establishing nonstop routes between the US and Venezuela.

The two airlines plan to work together to launch daily flights between Miami (MIA) and Simón Bolívar International (CCS), which serves Venezuela’s capital Caracas, as well as 3X-weekly services between MIA and Maracaibo (MAR), a city in the northwest of the country.

GlobalX is still awaiting FAA certification but intends to specialize in ACMI and wet lease charter flights serving the US, the Caribbean and Latin American markets. The planned services would be operated using GlobalX-owned Airbus A320 aircraft.

The US Transportation Department (DOT) banned all scheduled and charter flights between the US and Venezuela in May 2019 over security concerns, saying the country’s political crisis threatened the safety of passengers, aircraft and crew.

Although the flight ban remains in place—and Maduro remains in office—a statement from GlobalX said the company “anticipates that these restrictions will be removed over the next few months.”

“We look forward to working with the owners and management of Estelar, in accordance with all regulatory and governmental regulations, to help them re-establish their services to Miami,” GlobalX chairman and CEO Ed Wegel.

The statement added that Mercury, a public policy firm based in Washington DC, has been appointed to assist with consultations with the US government and to ensure compliance with all applicable government restrictions.

In the weeks leading up to the flight ban, the carrier served both CCS-MIA and MAR-MIA 3X-weekly, as well as operating 1X-weekly CCS-JFK service. All three routes used 767 equipment.

Estelar and GlobalX are not alone in seeking to restart US-Venezuela air services. In early February, Caracas-headquartered Laser Airlines filed an application with the US DOT seeking a foreign air carrier permit.

The airline previously requested permission in 2011 to launch scheduled and charter flights to Fort Lauderdale (FLL), but the DOT opted not to take any action.

However, Laser said it “remains committed to serving the US market.” The carrier’s latest filing outlines plans to start routes to MIA from CCS, MAR and Valencia (VLN), the third-largest city in Venezuela.

The renewed efforts to reinstate direct US-Venezuela routes follow a report from an independent United Nations (UN) human rights expert published this month, which called on the US and European Union among others to drop sanctions imposed on Venezuela, arguing that the restrictions have “exacerbated pre-existing crises.”

However, US ambassador for Venezuela James Story wrote on Twitter that the sanctions were “not responsible for the mismanagement of the Venezuelan people's resources, nor for the corruption of the regime, nor for the violations of human rights.”

In 2018, the last full calendar year before the flight ban, four carriers offered regular nonstop scheduled flights between the US and Venezuela. American Airlines was the largest operator, OAG Schedules Analyser data shows, providing 362,000 two-way seats across two routes from MIA to CCS and MAR.

Overall O&D traffic between the two countries totaled 601,995 two-way passengers in 2018, according to Sabre Market Intelligence figures, with Miami-Caracas the largest market.

Since the US-Venezuela flight ban was imposed, the US DOT in June 2020 fined Panama-headquartered Copa Airlines $450,000 for transporting passengers between the two countries.

The government body said that for almost a month after the ban took effect, the Star Alliance member sold more than 5,000 tickets for air travel on routes linking the nations, via a stopover point, transporting in excess of 15,000 passengers.

The airline told the US authorities that the violation occurred inadvertently, as it did not provide direct service between the countries and was not listed in an initial DOT order as a carrier servicing Venezuela. It added that the $450,000 fine reflected a settlement with the DOT.