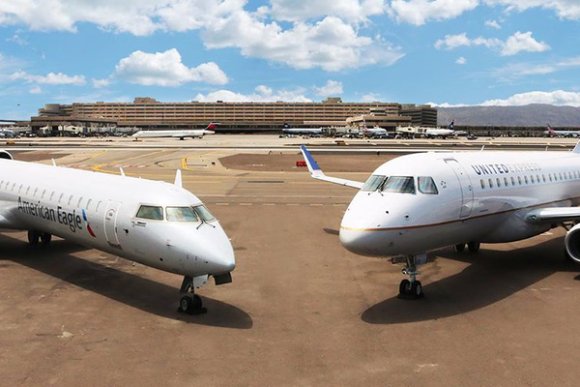 US regional carrier Mesa Airlines, which operates scheduled passenger flights as American Eagle and United Express, is seeking to bring its business model to Europe.

The Phoenix-headquartered company has partnered with Gramercy Associates in London, led by experienced airline executive Tony Davis, to develop a European-based joint venture.

The two parties plan to apply for an air operator’s certificate in the EU, with Mesa to own 49% of the entity once authorization has been secured. It is hoped operations will be underway by the end of 2021.

Under the current plan, the startup will use CRJ-900 aircraft on regional passenger and cargo routes in Europe through a capacity purchase or ACMI agreements.

This would mirror Mesa’s operations in the US where it operates a fleet of 160 aircraft and has agreements in place with American Airlines, United Airlines and DHL.

Overall, Mesa provides scheduled passenger service to 114 cities in the US, as well as flights to the Bahamas, Canada, and Mexico. Cargo flights are also offered out of Cincinnati/Northern Kentucky (CVG).

Mesa president and CEO Jonathan Ornstein said the business was “excited at the potential” of expanding internationally as part of efforts to diversify its operations.

The company’s previous efforts to grow overseas was in China and ended in 2009 when Mesa sold its 49% stake in Kunpeng Airlines to 51% equity partner Shenzhen Airlines.

Gramercy Associates’ Tony Davis, the former CEO of Tiger Airways and bmibaby, said: “We are looking forward to teaming up with Mesa to help bring the CPA and ACMI models that have been so successful in the US to Europe.”

After working at British Airways and Gulf Air, Davis was the founding MD of bmibaby, the LCC established by British Midland. He then held leadership positions at Tiger Airways in Singapore followed by Irelandia Aviation.