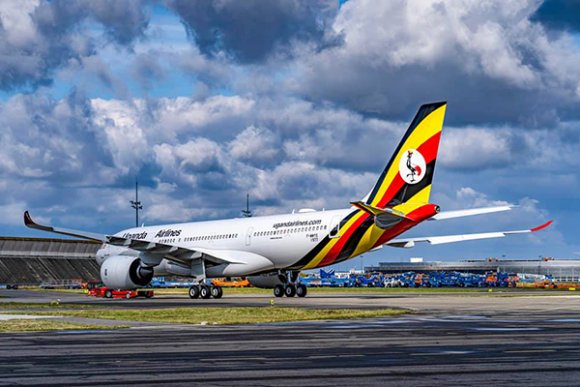 The national carrier, which was established in 2019, intends to start serving London, Dubai, Guangzhou and Mumbai later this year. The planned launch comes less than three months after the delivery of the airline’s first Airbus A330neo aircraft.

In a statement, Uganda Airlines said the move follows the completion of a five-phase certification process for its new A330-800 aircraft with the Uganda Civil Aviation Authority. The carrier now has two A330-800s in its fleet alongside four Bombardier CRJ900s.

“The process of obtaining traffic rights, foreign air operator permits and landing approvals in the target destinations is progressing well,” the airline added.

Although start dates have not been confirmed for the planned long-haul routes, it is understood that flights between EBB and LHR will be 5X-weekly from March 28.

OAG Schedules Analyser data shows that Uganda Airlines will compete with Emirates and flydubai on EDD-DXB but will be the only operator of nonstop service to London, Guangzhou and Mumbai.

The launch of the carrier formed part of Uganda president Yoweri Museveni’s plans to grow the economic benefits from aviation and increase competition. A 20-year investment masterplan was launched in 2014 that includes redeveloping EBB so it is capable of handling 7.5 million passengers by 2033.