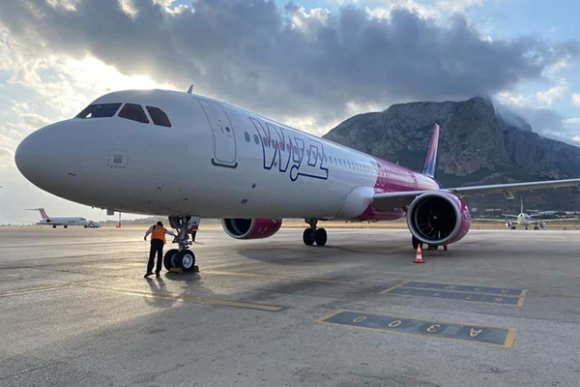 Palermo, the capital of the Italian island of Sicily, is to become the 42nd base in Hungarian ULCC Wizz Air’s network.

The airline is stationing two Airbus A321 aircraft at the city’s Falcone Borsellino Airport (PMO) from June, enabling the launch of seven new routes. The expansion comes just five months after the carrier began its first service to the destination with flights from Milan Malpensa (MXP).

Wizz Air CCO George Michalopoulos said the base “underpins” the airline’s commitment to developing its presence in Italy, where it has three other bases.

Starting on June 1, Wizz will fly from PMO to four domestic destinations: Bologna (BLQ), Pisa (PSA), Turin (TRN) and Verona (VRN. Flights will be daily to BLQ and PSA, 4X-weekly to TRN and 3X-weekly to VRN.

Wizz will face strong competition on all eight routes operating this summer from PMO, apart from to EAP where the latest OAG Schedules data shows it will be the only airline.

Plans for the new base were announced on the same day as Ryanair unveiled its own expansion strategy from PMO starting in June, increasing frequencies on all six domestic city pairs Wizz intends to operate from the airport.

Ryanair’s flights from PMO to MXP will increase from 21X-weekly to 24X-weekly, while 4X-weekly flights are being added to its TSF route, taking the service to 14X-weekly. BLQ, PSA, TRN and VRN will also grow by 2X-weekly frequencies each, expanding service to 16X-weekly for BLA and PSA, 12X-weekly for TRN and 9X-weekly for VRN.

“Vaccine distribution and administration is expected to accelerate in the coming months, resulting in an increase in demand for this summer,” Ryanair commercial director Jason McGuinness said.

The Irish carrier added that its Italian network would play an “integral part” to the revitalization of the Italian tourism sector, “contributing to connectivity and growth in all regions.”

The Palermo-Milan market is also well served, with Alitalia flying from Milan Linate (LIN), and Ryanair serving Milan Bergamo (BGY) in addition to MXP. Ryanair and Volotea will provide additional competition for Wizz on its PMO-TSF route as both carriers fly to nearby Venice (VCE).

As well as launching the base in Palermo, Wizz said it intends to launch four other new domestic routes in Italy this summer. From June 1, the carrier will serve MXP-Cagliari (CAG) daily and PSA-Brindisi (BDS) 3X-weekly. Starting on June 2 is a 5X-weekly Catania (CTA)-PSA route and a 4X-weekly BLQ-BDS service.

Other network additions announced by Wizz this week include three routes from Tel Aviv (TLV) in Israel to the Greek islands of Heraklion(HER), Rhodes (RHO) and Santorini (JTR) from June to mid-September. TLV-RHO starts June 10 and will be 1X-weekly, with TLV-HER and TLV-JTR joining the ULCC’s network on June 15, operating 2X-weekly and 3X-weekly respectively.