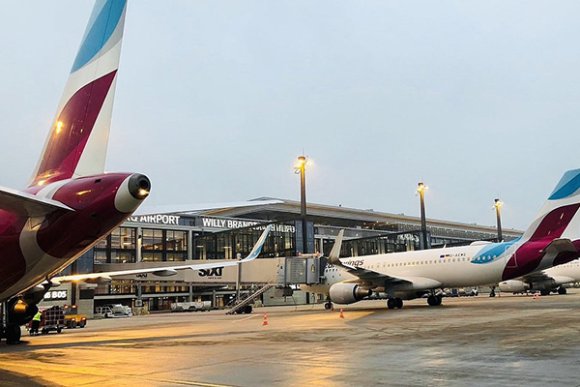 Eurowings hopes to strengthen its position at Berlin Brandenburg (BER) with the launch of a new base and plans to enter the British leisure market for the first time in response to what the carrier describes as “holiday fever” in the UK.

Three Airbus A320s will be stationed at BER from April 1, 2021, enabling the Lufthansa subsidiary to serve Cologne/Bonn (CGN), Düsseldorf (DUS) and Stuttgart (STR) up to three times per day. The airline said the expansion would also better connect inbound tourists to Germany’s capital.

The move is expected to create 100 jobs and allow many former Air Berlin pilots and crew—who joined Lufthansa Group after the Berlin-based carrier’s demise—to return home.

“Others are leaving, we are staying here,” Eurowings CEO Jens Bischof said. “Berlin is and will remain an absolute tourist magnet and one of the most exciting metropolises in Europe, both culturally and historically. So, it’s only logical that we, as Germany's number one tourist airline, expand our presence in the capital by opening our own base.”

Eurowings was among the first airlines to serve BER after the airport opened for commercial traffic on Oct. 31, 2020. According to data provided by OAG Schedules Analyser, the LCC is this week (w/c March 8, 2021) serving four destinations from the airport, flying to Beirut (BEY) 2X-weekly in addition to 11X-weekly services to CGN, DUS and STR.

Current schedules indicate that Eurowings will offer about 20,000 weekly departure seats from BER during the summer peak, placing it as the airport’s fourth-largest carrier behind easyJet, Ryanair and Lufthansa. However, the additional capacity offered by the three A320s stationed there could see the carrier overtake parent Lufthansa.

The planned launch of the BER base comes as Eurowings prepares to enter the UK leisure market for the first time, responding to strong demand since the UK government announced a roadmap for the resumption of international travel.

The carrier will connect Manchester (MAN) and Birmingham (BHX) with the Mediterranean island of Mallorca from May, initially offering 2X-weekly flights. Further expansion “will be considered in the coming weeks.”

“Eurowings is offering services to customers in Great Britain since a run on holiday travel has already begun there,” the airline said in a statement. “As soon as the date for the end of the corona shutdown was set, many Britons immediately secured flights to Southern Europe, mainly to Mallorca.”

Eurowings is the largest provider of flights between Germany and PMI—known as the Palma Shuttle—and will offer about 96,000 two-way weekly seats during the peak summer season this year.However, the routes from MAN and BHX will be its first foray into the UK-Mallorca market.

Other German airlines to have served UK-Mallorca routes in the past include Air Berlin, Condor and Germania.

Details of the new routes come just weeks after Lufthansa confirmed plans to add three new services to the UK and Ireland from June. The Star Alliance member will link Frankfurt (FRA) with Bristol (BRS), Cork (ORK) and Newcastle (NCL).