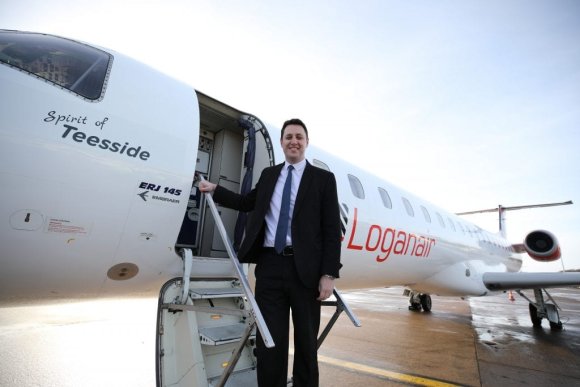 The Scottish carrier will offer a 6X-weekly service from May 24, flying in each direction Monday to Friday and on Sundays. The 70-min. flight will depart MME on weekdays at 2.25 p.m., with the return flight leaving BRS at 4.05 p.m.

As part of the renewed partnership with MME, Loganair has named one of its Embraer 145 jets Spirit of Teesside (pictured with Tees Valley Mayor Ben Houchen). The airline hopes the new BRS route will appeal to business passengers, as well as attracting VFR and some leisure traffic.

BRS CEO Dave Lees said: “Frequent flights between Bristol and the North of England help foster strong links for business and tourism, which is why Loganair’s new Teesside service is such great news.

“Teesside is a convenient gateway from which to explore the North England, just as Bristol Airport is the ideal starting point for visitors to South West England and South Wales.

Meanwhile, easyJet on March 9 put its BRS summer flight schedule for 2022 on sale. The LCC will serve 70 destinations from the airport, including new routes to Santorini (JTR) and Mykonos (JMK).

“In addition to the 2022 flights we have a raft of new destinations and frequencies for this summer and we are ready to ramp up our flights as soon as it is safe to do so,” easyJet UK country manager Ali Gayward said.