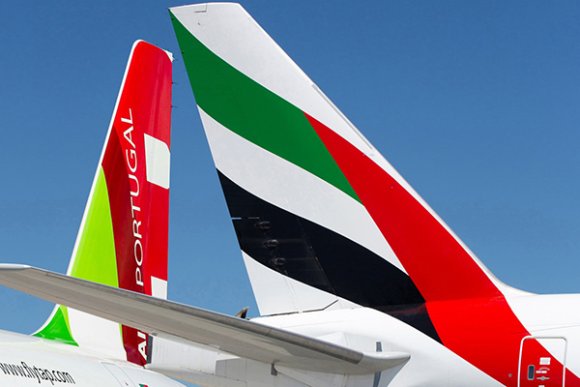 Emirates and TAP Air Portugal have signed a memorandum of understanding to increase the scope of their current codeshare partnership.

As part of the agreement, the Gulf airline said it would support the Portuguese national carrier as it “investigates flying to Dubai.”

Emirates is currently the only provider of nonstop service between the United Arab Emirates and Portugal, currently offering 4X-weekly flights between Dubai (DXB) and Lisbon (LIS) using Boeing 777-300ER aircraft.

The new agreement, which starts May 1, 2021, will see both airlines explore ways to enhance the co-operation on the frequent flyer programs, including reciprocal earning and redemption opportunities. They also plan on supporting their respective stopover programmes in DXB and LIS.

Emirates said its passengers would also be able to access additional domestic destinations in Portugal, as well as TAP’s flights to cities in the US, Canada, Mexico, Brazil, Senegal, Guinea-Bissau, Guinea-Conakry, Morocco, Tunisia, Gambia and Cape Verde.

“Emirates and TAP Air Portugal have enjoyed a mutually successful codeshare partnership for the past eight years,” Emirates CCO Adnan Kazim said. “We are delighted to expand this relationship and look forward to delivering even more benefits to our customers.”

Meanwhile, reports over the weekend said that Portugal’s government has submitted a notification to the European Commission that it wants to provide €463 million ($553 million) to TAP as an interim measure while a restructuring plan is being considered.