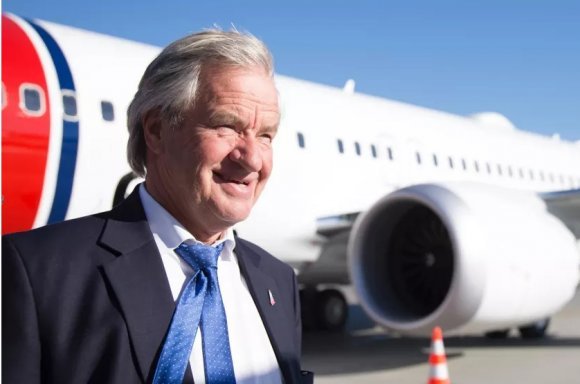 Norse Atlantic Airways aims to begin service by the end of 2021, connecting destinations such as New York, Los Angeles and Miami in the US with European cities like London, Paris and Oslo. The carrier intends to operate its network using Boeing 787s.

If the business model sounds all too familiar that is because a key investor leading the startup is industry veteran Bjørn Kjos (pictured), the co-founder of Norwegian who steered the company’s rapid expansion into the transatlantic market. He stepped down as CEO of the airline in July 2019 as part of a restructure.

Kjos has teamed up with Bjørn Kise, who helped to establish Norwegian and spent six years as the carrier’s chairman until 2002, and Bjørn Tore Larsen, a co-founder of Oslo-based staffing business OSM Aviation.

“We now have a historic opportunity to build a new airline from the start,” said Larsen, who is also Norse Atlantic Airways CEO. “When the world reopens, there will be a need for an innovative low-cost carrier in the intercontinental market.”

The LCC’s founders said they are in talks with lessors to take 12 former Norwegian 787s, adding that nine have already been secured. The remaining three contacts are pending.

Larsen said: “We have industry knowledge and have secured modern Dreamliners on very good terms. Norse Atlantic Airways will give most people an opportunity to travel between the continents, without it costing too much.”

According to a report by Norwegian publication Dagens Naeringsliv, Norse Atlantic Airways has raised $24 million from investors and aims to list its shares on Oslo’s Euronext Growth stock market in April. Larsen owns 63% of the new airline, while Kjos and Kise own 15% and 12% respectively.

Although details of Norse Atlantic Airways’ planned route network are yet to be confirmed, the airline will no doubt seek to fill gaps left by Norwegian on services between Europe and the US once COVID-19 travel restrictions permit.

Norwegian announced its exit from the long-haul market in January, saying that ongoing demand uncertainty caused by the pandemic meant that its operations were no longer viable.

“By focusing our operation on a short-haul network, we aim to attract existing and new investors, serve our customers and support the wider infrastructure and travel industry in Norway and across the Nordics and Europe,” Norwegian CEO Jacob Schram explained at the time.

Analysis of Sabre data looking at the revenue per available seat kilometer (RASK) of each airport pair in Norwegian’s network during 2019—and taking capacity, passenger volumes, load factor and distance into account—highlights some potential routes that Norse Atlantic Airways could look to serve.

London Gatwick (LGW)-New York John F Kennedy (JFK) was the top long-haul service by RASK during the year. The carrier offered 312,590 two-way seats between the destinations, giving the airline a 10.7% capacity share of all seats provided between London and New York.

While LGW-JFK was the highest-ranking long-haul service by some distance, other routes that performed relatively well included LGW-Miami (MIA), LGW-Chicago O’Hare (ORD) and LGW-Boston (BOS).