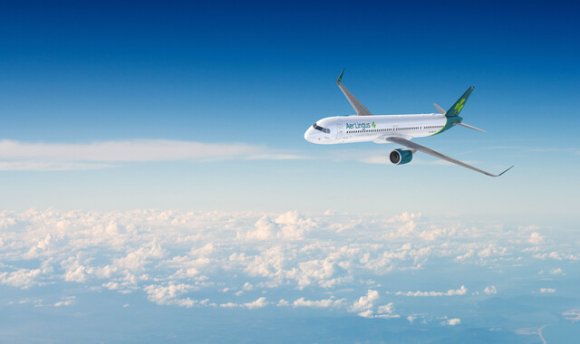 Aer Lingus will begin its inaugural transatlantic services from the UK in July, launching an initial three routes from Manchester (MAN) this year with a fourth to follow in 2022.

The Irish carrier will commence service to New York John F Kennedy (JFK) and Orlando (MCO) from July 29. Barbados (BGI) will join the airline’s network from Oct. 20 and a route to Boston (BOS) has been earmarked for summer 2022.

Aer Lingus’ booking system shows MAN-JFK will be daily using Airbus A321LRs—making it among the first airlines to operate the aircraft on regular scheduled services between the UK and the US—while MAN-MCO will be 5X-weekly on board A330-300s. Flights between MAN and BGI will also use the larger A330-300 and operate 3X-weekly.

“These routes will be a great addition to the departure boards here at Manchester as we look forward to restarting international travel,” MAN MD Karen Smart said.

“Pre-pandemic there were more than 5.5 million passengers who crossed the Atlantic each year via Manchester and so to be able to offer these services with a new carrier is great news.

“In addition, Aer Lingus’s commitment to the UK’s northern gateway results in the creation of 120 much-needed jobs.”

As reported by Routes, a new subsidiary called Aer Lingus (U.K.) Ltd has been set up to fly the routes, but the flights will operate under the Aer Lingus name and have the EI designator code. The US Transportation Department (DOT) granted tentative approval for the carrier to begin marketing the services earlier this month.

Aer Lingus is one of MAN’s longest serving carriers, currently flying to Dublin (DUB) and Belfast City (BHD), with flights to Cork (ORK) set to resume in the summer.

Data provided by OAG Schedules Analyser shows that the carrier will compete directly with Virgin Atlantic on flights to JFK, MCO and BGI, while TUI Airways intends to serve Orlando Sanford (SFB) during the summer season.

United Airlines also served MAN-Newark (EWR) nonstop before the pandemic, but flights have been suspended since March 2020.

The planned launch of Aer Lingus’ new transatlantic routes comes as a cross-section of groups from across the US aviation industry called on the Biden Administration to develop a risk-based roadmap for rescinding international travel restrictions by May 1.

Most non-essential international passenger traffic to the US from Brazil, China and the European Union’s Schengen Area has been banned since last year.

“The roadmap to safely reopen international travel should be finalized before May 1, 2021, so that a plan is in place to reopen by the summer of 2021 if vaccine distribution and epidemiological trends continue in a positive direction,” the groups including Airlines for America (A4A), Airports Council International-North America (ACI-NA) and IATA said.

Most non-essential travel from the UK is currently banned although the government is working to restart international travel from May 17.