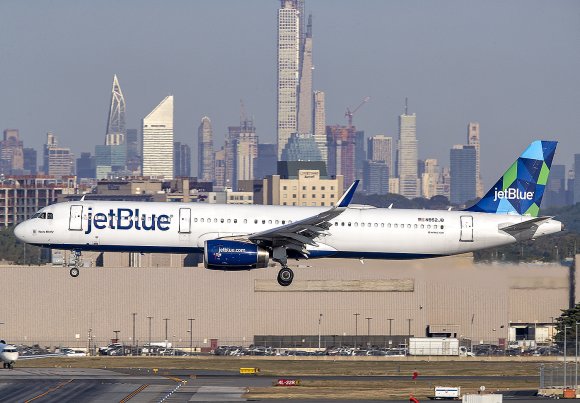 Spirit Airlines has filed a complaint with the US Transportation Department (DOT) which questions whether JetBlue Airways and American Airlines are coordinating flights and routes “outside of the scope” of their new Northeast alliance.

The Florida-based ULCC’s opposition follows a request by JetBlue to shift seven frequencies between Fort Lauderdale (FLL) and Quito (UIO) to service between New York John F Kennedy (JFK) and Guayaquil (GYE). The move would increase the JFK-GYE route to double-daily.

American is also seeking to adjust its flights to Ecuador by moving its 7X-weekly services to UIO and GYE from Dallas Fort Worth (DFW) to Miami (MIA). The transfer will increase both MIA-UIO and MIA-GYE to 3X-daily.

The oneworld alliance member said the switch will “better align capacity with current demand” and is therefore in the public interest. If the request is approved, American will operate all 42 of its permitted weekly US-Ecuador frequencies from MIA.

In documents filed with the DOT, Spirit alleges that the timing of JetBlue’s proposed change “suggests that the two carriers are coordinating outside the scope of the alliance,” adding that the moves “raise obvious questions of either explicit or tacit coordination.”

“JetBlue reduces its South Florida-Quito service by 50% as American expands Quito service there, both moves explained as to better match demand,” Spirit said in the DOT filing. “At the same time, by doubling service from New York to Guayaquil, JetBlue will dominate that market.

“Because of the lack of slots and frequencies no independent carriers can effectively compete in the New York-Guayaquil market with JetBlue offering 400 seats a day. However, under the terms of the alliance American and JetBlue can codeshare on the New York route.”

Spirit currently serves FLL-GYE 3X-weekly using A320neos, with data provided by OAG Schedules Analyser showing that the resumption of daily flights is planned during May.

Given that JetBlue and American operate 58% of the available US-Ecuador frequencies, Spirit claimed the airlines are “in a position to dominate both the New York and South Florida markets” to Ecuador. The ULCC added that the changes were “part of a larger plan” to control the New York-Florida market.

American and JetBlue announced on Feb. 18 plans to press ahead with their planned tie-up, dubbed the Northeast Alliance. Initially, JetBlue’s code is being placed on 25 American routes and American’s code is being placed on 49 JetBlue routes. These services mainly comprise domestic point-to-point markets. The airlines are also introducing 33 new routes in the first phase of their alliance.

Spirit is not the only carrier to complain about JetBlue’s proposed JFK-GYE expansion. Eastern Airlines—which is the only nonstop competitor in the JFK-GYE market—said the transfer request “undermines competitive and public interest considerations to the detriment of the traveling public.”

A filing by Eastern to the DOT said: “If the change is approved, JetBlue and American could easily dominate the US-Ecuador market. The partnership can leverage their cache of coveted JFK slots for expanded New York-Ecuador codesharing under their joint venture, while simultaneously reducing competition against one another in non-codeshare-eligible southern Florida.”

JetBlue and American are yet to respond to the claims made by Spirit and Eastern.