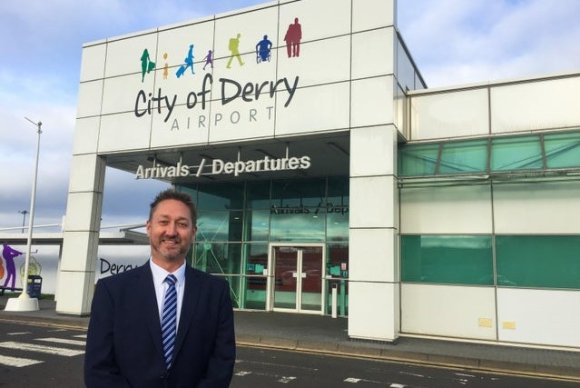 City of Derry Airport (LDY) MD Steve Frazer (pictured) has welcomed recent additions to the airport’s route map but said the introduction of flights to a major hub could act as a growth catalyst for Northern Ireland’s northwest region, increasing inbound and outbound leisure and business traffic.

“We’re very rarely the entry point so hub access is vitally important,” he told Routes. “If we can secure a route to a major hub, it opens up opportunities to sell Derry to an international audience and connect the city with the likes of Dubai and New York.”

There are currently just two routes operating from LDY, which is located about 90 km away from Belfast International (BFS), with Loganair offering two flights per week to Glasgow International (GLA) and 13X-weekly round trips to London Stansted (STN).

Financial support for the latter route was recently extended for a further two years by the UK’s Department for Transport and the Northern Ireland Department for the Economy. About £4.3 million ($5.9 million) will be provided to ensure Loganair maintains service until at least April 2023.

Loganair is also starting a 4X-weekly route between LDY and Liverpool (LPL) from May 24 using Embraer 145 aircraft. Operations will become daily by the end of June, with the GLA service also increasing to 5X-weekly.

The Scottish carrier stepped in to serve LDY-LPL after Ryanair ended its two routes from LDY. The Irish ULCC previously served Edinburgh (EDI) and LPL but pulled both in December 2020 alongside 10 other UK domestic services.

Ryanair’s decision followed a row with the UK Civil Aviation Authority, with the airline claiming a “sudden change of policy” by the regulator 10 days before the UK left the EU made operation of the routes impossible.

“The return of the Liverpool route with Loganair is fantastic and we’re looking forward to the service going daily from the end of June—something that we’ve never had before,” Frazer said.

“We think the staycation market will be particularly strong over the next 12 months so it’s a positive development. Airlines are obviously being cautious in their approach and have to really understand the market that they’re aiming for, but the leisure demand is there.

“We have a strong tourism offer for inbound passengers, with the Giant’s Causeway to the east and the Wild Atlantic Way to the west. Derry/Londonderry is also one of Europe’s only remaining completely walled cities, so we are at the heart of most visitors’ tours of the island of Ireland.”

Frazer said securing nonstop routes to Manchester (MAN) and Birmingham (BHX) are high on the agenda as both are large unserved point-to-point markets—and offer good onward connections to international destinations.

“There’s almost 500,000 people who make the journey between the two cities and our catchment area every year, so it’s a big untapped opportunity,” he added.

ASM’s Airport Catchment Analyser tool shows MAN was the top passenger market from Derry/Londonderry’s catchment area in the 12 months to Q1 2020. There were about 263,000 two-way passengers between the destinations during the period despite the absence of direct air service.

Currently these passengers travel the 90-min. journey to Belfast to catch their flights, with some even travelling to Dublin Airport (DUB) some three hours away by road.

Frazer explained that a large percentage of LDY’s existing traffic is workers traveling to the mainland UK and returning at the weekends, which meant that the airport’s passenger numbers only dropped by about 50% during the pandemic, whereas many other UK airports lost upwards of 80%.

On the international front, JetsGo Holidays will this summer offer weekly flights to Palma de Mallorca (PMI) between June and August—and Frazer said LDY is keen to add more leisure routes to other Spanish destinations. The airport has been without scheduled international service since September 2016 when Ryanair suspended operations to Faro (FAO) in Portugal.

Elsewhere, launching scheduled service to DUB also remains a possibility. The potential for air service between LDY and DUB was outlined in the New Decade, New Approach agreement published in January 2020, which saw the Northern Ireland Executive restored after a three-year hiatus.

The document said: “The Irish Government also intends to take forward a review of the potential for government support to renewed viable air routes from Cork to Belfast and Dublin to Derry, working with the UK Government and Northern Ireland Executive to deliver improved connections as a priority.”