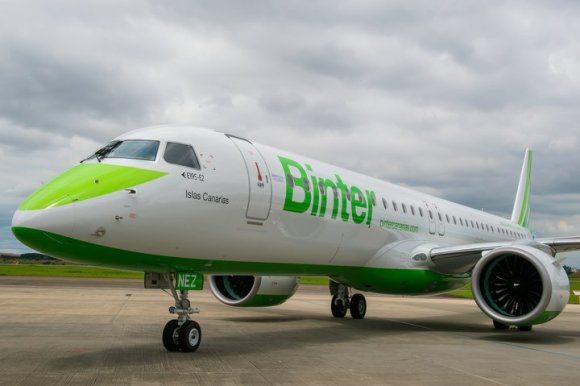 The airline, which mainly operates domestic flights, intends to begin international service to the French destinations of Lille, Marseille and Toulouse from July, alongside the Italian cities of Turin and Venice.

The expansion adds a further 18 weekly flights to Binter’s network, meaning that the carrier will be flying a total of 94 weekly frequencies across its routes between the Canary Islands and national and European destinations.

From July 1, a 2X-weekly service will begin from Gran Canaria (LPA) to Lille (LIL), followed by a 1X-weekly route to Marseille (MRS) a day later. Flights to Toulouse (TLS) start on July 3, operating twice a week.

Binter will also begin the first of its two new 2X-weekly Italian routes on July 3, flying from LPA to Turin (TRN). Service to Venice (VCE) begins on July 5.

All five new routes will be operated using Embraer E195-E2 aircraft. The airline took delivery of the fourth of five of the single-aisle jets on order in late March.

Binter president Rodolfo Núñez said the airline was firmly committed to helping the Canary Islands recover from the impact of the pandemic and hopes the new routes will increase tourism to the archipelago. He added that the carrier is exploring the possibility of adding more new destinations from Gran Canaria and Tenerife.

Other international routes operated by Binter include flights from LPA to Agadir (AGA), Dakar (DSS), Funchal (FNC) and Lisbon (LIS).

The airline has also announced plans to add two new domestic routes from LPA, offering direct flights to Reus (REU), near to the city of Tarragona, and Jerez (XRY). Service to REU will be 2X-weekly from July 1 through Oct. 15, while LPA-XRY starts July 3 and will be 1X-weekly.