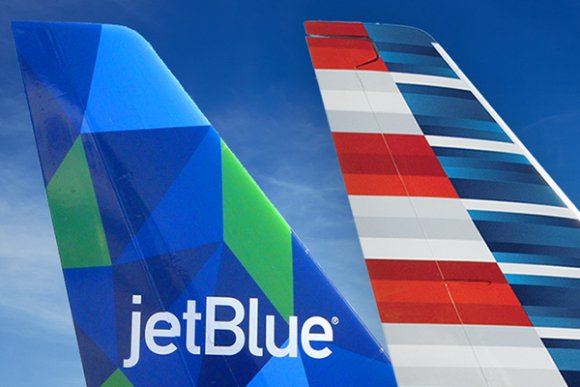 American Airlines and JetBlue Airways announced a major expansion of service from hub airports in Boston (BOS) and New York City (JFK and LGA), as the two carriers proceed with the next phase of their northeast US alliance (NEA).

The expansion will see the two airlines add a combined 24 routes to a host of new destinations, both domestic and international, while increasing and upgrading service on a slew of others, made possible in part by a series of slot swaps at New York’s crowded JFK and LGA airports.

At BOS, the NEA will enable the codeshare partners to serve 46 of the top 50 North American destinations from that market. New routes being launched by American from BOS include services to Cincinnati (CVG), St. Louis (STL) and Toronto (YYZ); JetBlue will add routes to Asheville, North Carolina (AVL), Kansas City (MCI), Milwaukee (MKE) and Vancouver (YVR).

American will also introduce transcontinental service from BOS to Los Angeles (LAX) on its premium-heavy Airbus A321T aircraft, which feature lie-flat seats in a low-density layout.

In New York, JetBlue will operate two-dozen domestic departures out of LGA by the end of the year, before doubling to 50 by summer 2022. Up to 15 of the added routes will link the carrier’s focus cities in Boston and New York.

To enhance the customer experience, the two carriers will install a behind-security connector between American’s Terminal 8 and JetBlue’s Terminal 5 at JFK.

Announced last July, the NEA was approved by the Trump Administration in January on former Transportation Secretary Elaine Chao’s last day in office. The deal is not without its share of critics, however, including some in the current administration.

Speaking to the Aviation Week Network, Chris Brown, VP-government affairs and ULCC policy at the National Air Carrier Association, which represents a host of smaller carriers including Spirit, said that the codeshare partnership “will have an adverse impact on competition in the Northeast markets.”