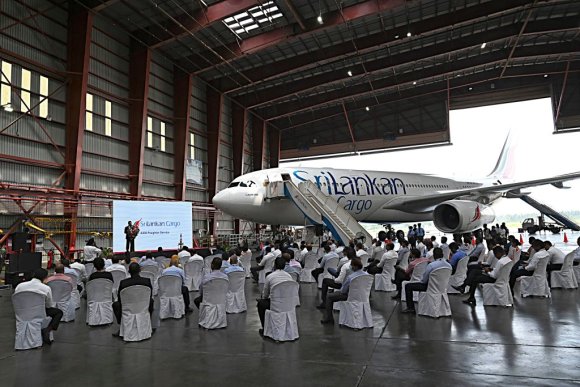 SriLankan Airlines, like many carriers around the world in the COVID-19 crisis, has turned to cargo to keep its aircraft in service and generate revenue—and cargo will continue to be the airline’s main driver for quite some time.

“We have kept our head above water,” SriLankan Airlines CEO Vipula Gunatilleka told the Routes Reconnected conference on April 28. “We have found a lot of opportunities in cargo as a result of being an island nation. We are happy to say we are operating a cargo network that includes destinations such as Milan and Sydney.”

In fact, cargo operations have proved so successful that the carrier will prioritize cargo in terms of future network and fleet planning. “Our strategy is to build the passenger network around the cargo network,” Gunatilleka said.

The airline, in fact, is pursuing the purchase of two freighter aircraft. It currently operates a fleet of 24 passenger aircraft, a mix of 12 Airbus A330s and 12 A320 family aircraft.

But at least six aircraft in the carrier’s fleet are slated to be retired in the next two years. “So, we are looking at replacements [and in the current environment, airlines] can get aircraft at a much cheaper price,”  Gunatilleka said.

He said the airline will stick with an all-Airbus fleet and is looking at the A330-900 aircraft and A350 for its future widebody fleet. “Today the A350 is affordable, and also with the cargo network we are operating it may be a handy aircraft to have, especially on long haul routes,” Gunatilleka said.

He noted that SriLankan’s “dependence on India has reduced tremendously” during the crisis, though a reopening of India would boost the airline's prospects.

“We’ll have ups and downs” coming out of the COVID-19 crisis, Gunatilleka said. “India will recover fast and we also expect the same from China. And a lot of Middle East passengers will be coming to Sri Lanka.”

He noted that the UK is the number one tourist destination for Sri Lankans and the carrier is eager to restart flights to London Heathrow (LHR). The airline is also “looking at Frankfurt and Paris, and waiting for the right time to launch those routes,” Gunatilleka said.