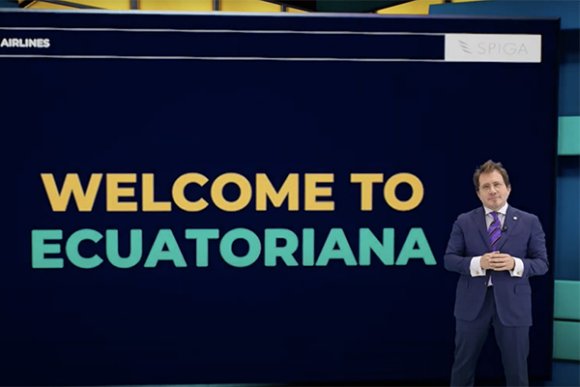 Details of the startup’s planned strategy were announced by CEO Eduardo Delgado as part of a live YouTube broadcast to showcase the carrier’s new brand identity.

Delgado said Ecuatoriana is currently undergoing a process to obtain its air operator’s certificate, which he hopes will be in place by September.

Once the airline has been cleared to fly, its maiden route will connect Quito’s Mariscal Sucre International Airport (UIO) with Guayaquil (GYE) using De Havilland Dash 8-400 aircraft. Flights could be up to 3X-daily.

As well as flying the 78-seat Dash 8-400 on domestic routes and cross-border flights, Ecuatoriana has selected the Boeing 717-200 aircraft for its second phase of operations. The 717-200 is a twin-engine jet with a capacity for 115 passengers, configured on three classes of service.

Delgado said the 717-200 would be used for more “mature” international routes, as well as using the aircraft to fly to the Galapagos Islands.

Ecuatoriana is the latest incarnation of the Ecuatoriana de Aviación brand, which can trace its roots back to 1957 and was Ecuador’s national airline until it folded in 2006. It is hoped the carrier’s launch will fill a gap in the market following the demise of state-owned flag carrier TAME.

According to data provided by OAG Schedules Analyser, domestic capacity in Ecuador this week (w/c April 26, 2021) is 27,221 departure seats, down from 83,952 during the same week in 2019. TAME was the second largest domestic carrier two years ago, offering in excess of 25,000 weekly departure seats.

Ecuatoriana’s brand identity will feature a hummingbird as its logo, which is said to represent Ecuador’s biodiversity.

Meanwhile, Quito’s Mariscal Sucre International, which will be Ecuatoriana’s main base, has announced that airport president and CEO Andrew O’Brian is stepping down from the role after eight years.

He is being replaced by Ramón Miró, who is the president of HAS-Development Corporation. HAS is one of the shareholders of Quiport, which operates UIO. Miró will take over from O’Brian on June 1.