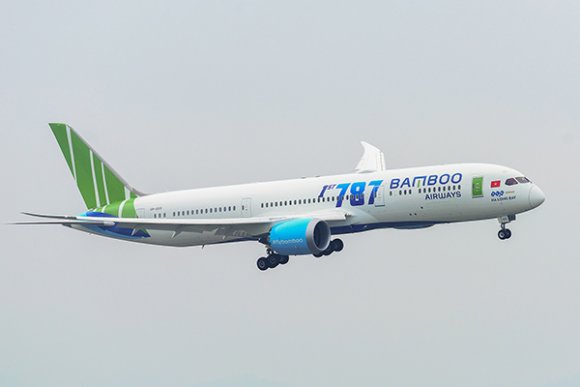 Bamboo Airways’ ambitions of serving the US market have moved a step closer after the Vietnamese airline was granted takeoff and landing slots at two airports in California.

Although the exact schedules are yet to be published, the airline said flights will arrive in LAX and 9.30 a.m. and depart for SGN at 12.30 p.m. The SFO service will land at 10 a.m. and leave for SGN at 1 p.m.

Frequencies are expected to be 4X-weekly initially, increasing to daily as COVID-19 travel restrictions ease. Bamboo plans to use Boeing 787-9 aircraft on the two routes.

Chairman Trinh Van Quyet added that the carrier also expects to begin operating charter flights to the US from July.

Vietnam’s Ministry of Transport is currently finalizing procedures to designate Bamboo the rights for Vietnam-US charter flights following a proposal made by the Civil Aviation Administration of Vietnam in April.

This comes after the US Transportation Department (DOT) granted Bamboo approval to operate 12 charter or repatriation flights to the US in November 2020 following Vietnam’s upgrade to Category 1 rating by the FAA in February 2019.

Although there are currently no nonstop flights between Vietnam and the US, Vietnam Airlines operated a number of repatriation flights between Hanoi (HAN) and Houston George Bush (IAH), SFO and Washington Dulles (IAD) during 2020.

The latest schedules data provided by OAG Schedules Analyser shows the carrier has also filed plans to begin a 2X-weekly SGN-SFO service from Aug. 3, 2021 on board A350-900 aircraft.

O&D traffic between Vietnam and the US totaled 1.77 million two-way passengers during 2019—all of which was indirect. The biggest O&D city pair was Ho Chi Minh City-Los Angeles with 300,300 passengers, followed by Ho Chi Minh City-San Francisco with 198,000.

Bamboo’s latest long-haul network plans come less than two months after the carrier was granted slots at London Heathrow (LHR) to operate six flights per week from May. The airline, which commenced operations in January 2019, intends to serve the UK capital from HAN and SGN.

In April, Bamboo also confirmed that it is planning to list on the New York Stock Exchange (NYSE) to raise capital and fuel its expansion. The privately owned airline wants to raise $200 million by issuing 5-7% of its shares and increasing its capital to $4 billion.