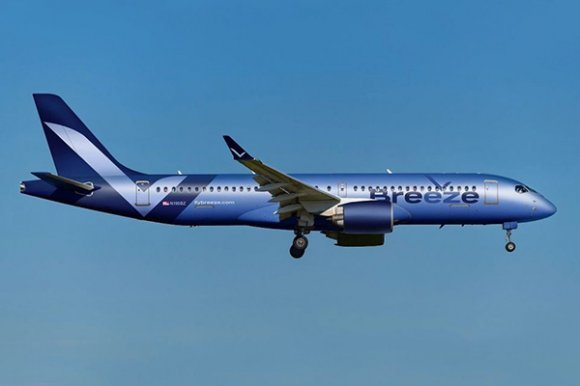 The carrier received its air operator’s certificate (AOC) on May 14, paving the way for the airline to begin commercial operations. The approval authorizes Breeze to engage in interstate scheduled air transportation of persons, property and mail.

Although the LCC has so far remained tight-lipped about its planned network, a recent interview with Neeleman revealed that Tampa (TPA)-Charleston (CHS) is likely to be Breeze’s first route. Nashville (BNA), New Orleans (MSY) and Pittsburgh (PIT) are among 15 cities also expected to receive service as part of the first phase of expansion.

Breeze said its network would focus on point-to-point flights from smaller secondary airports, bypassing hubs. Almost 80% of routes will have no competition, with services targeting “cities that have been forgotten or neglected.”

After securing an AOC, the airline has now requested that the US Transportation Department (DOT) make its certificate “of public convenience and necessity effective as soon as possible.” The DOT in March deemed Breeze to be “fit, willing, and able” to begin flying.

Breeze has agreed to acquire 60 Airbus A220-300 aircraft produced in Mobile, Alabama, with the first due to arrive in August 2021. Prior to the A220 deliveries, service will begin with leased Embraer E190 and E195 aircraft.