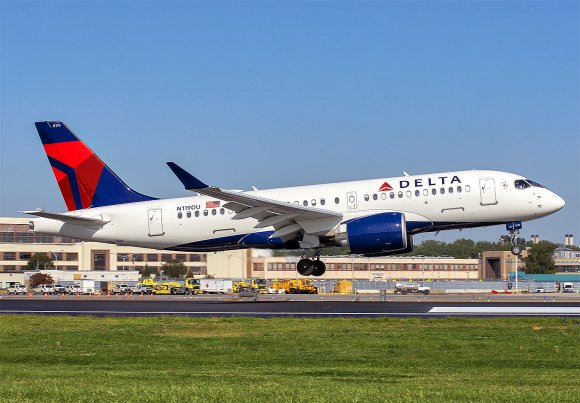 Three of the new routes are from Boston Logan (BOS), with the SkyTeam member adding a 2X-daily service to Dallas/Ft. Worth (DFW) and a 3X-daily service to Charlotte Douglas (CLT)—both of which are large hubs for American.

The DFW route will be operated using Airbus A220-100, while the CLT service will be on board Embraer 175 aircraft. Flights will start on Oct. 4.

Service to Toronto Pearson (YYZ) will also grow this year with new flights from BOS and New York LaGuardia (LGA). A 3X-daily BOS-YYZ route begins Oct. 4—a route last operated by Delta in August 2013—with a 2X-daily LGA-YYZ service starting on Aug. 5. Both flights will be operated using E175s.

Delta said it plans to boost LGA-YYZ to six times a day this fall as travel restrictions lift and transborder demand returns. Service to YYZ and CLT will be operated by Delta Connection partner Republic Airlines.

In addition, the Atlanta-based airline intends to upgrade service between BOS and Cincinnati/Northern Kentucky (CVG) from October. The carrier will upgauge the route from a 76-seat Bombardier CRJ900 to a 109-seat A220-100.

The move also marks the A220’s official debut in CVG since it first joined Delta’s fleet in 2019.

From July 7, the airline will also switch all cross-country flights from BOS to Los Angeles (LAX) from Boeing 737-800 aircraft to 757-200s, equipped with the lie-flat Delta One cabin.

Delta’s A220 expansion from BOS complements existing service in other major business routes, such as LGA to DFW and Houston’s George Bush Intercontinental (IAH).

The carrier said it plans to further expand the A220 to other Northeast business markets this fall, including LGA to Chicago O’Hare (ORD) and from LGA and BOS to Raleigh-Durham (RDU).

“As demand grows, our commitment to Boston and New York is stronger than ever, which is why we’re continuing to invest in these communities to offer more nonstops and greater connectivity to top markets,” Delta SVP network planning Joe Esposito said.

According to data provided by OAG Schedules Analyser, Delta will compete with both American and JetBlue on the routes from BOS to CLT and DWF, while Air Canada and WestJet are each scheduled to resume BOS-YYZ later this summer.

In April, American also announced plans to introduce new service from BOS to CVG and YYZ. As part of that announcement, the carrier said flights between BOS and LAX would see its premium-heavy Airbus A321T aircraft being used beginning Nov. 2.