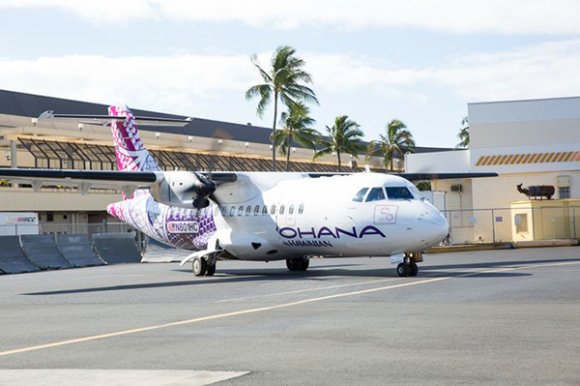 Hawaiian Airlines is terminating its Ohana turboprop operation, confirming that the service will not return after months of suspension related to the COVID-19 crisis.

Ohana used four ATR 42s for passenger service between Honolulu (HNL) and neighboring islands Molokai and Lanai, as well as to Kapalua on the northwest coast of Maui. It also used four ATR 72s for freight-only services within the state. The turboprops are owned by Hawaiian but operated on its behalf by Empire Airlines.

“This is a heartbreaking decision, particularly for those of us who were involved in launching the [Ohana] business in 2014,” Hawaiian CEO Peter Ingram said. “We took a hard look at the service and could not identify a way to restart and sustainably operate.”

Hawaiian said it “incurred significant costs and faced numerous obstacles in restarting service with its current fleet of aircraft.” It would not have been able to restart Ohana flights until the end of this year at the earliest.

Another factor cited by Hawaiian is a labor contract clause that was triggered during the pandemic. Its pilots’ contract contains an industry-standard clause that prevents contract flying if mainline jet services drop below a certain threshold, Hawaiian said.

Empire had up to 97 staff dedicated to the Ohana operation, with 82 pilots, flight attendants and maintenance workers based in Hawaii, and another 15 staff at Empire’s Idaho base. Contractor Worldwide Flight Services employed 28 ground handling workers for Ohana. Hawaiian Airlines employees managed other parts of the Ohana operation, and they will be reassigned to other parts of the company.

Hawaiian said it is moving the ATRs to the US mainland “for storage and eventual sale.” The company lent some of its ground support equipment to Mokulele Airlines, which is providing service between Honolulu and Molokai and Lanai. Hawaiian said it will “continue to explore opportunities to return” to these two islands and reconnect them to its network.