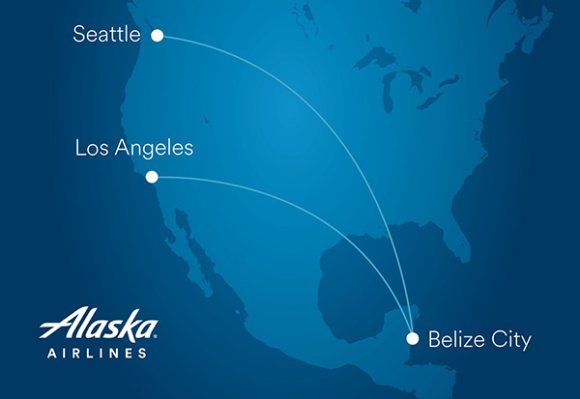 Seattle-based Alaska Airlines has revealed further details about its planned service to Belize, which will become the fourth foreign country it flies to, joining Canada, Costa Rica and Mexico.

The airline said earlier this month that it intends to start service to Belize City (BZE), hinting that flights will be offered from at least one of its West Coast hubs of Seattle (SEA), Los Angeles (LAX) Portland (PDX) and San Francisco (SFO).

Now, the oneworld alliance member has confirmed that seasonal flights from LAX and SEA will begin on Nov. 19, operating 4X-weekly and 2X-weekly respectively. Both routes will be on board Boeing 737-800 aircraft.

“Increased commercial air service is imperative to the success of Belize's tourism, and with these new West Coast connections, we are able to offer convenience and more availability to our guests looking for a unique getaway,” Belize's Minister of Tourism and Diaspora Relations, Anthony Mahler said.

Alaska Airlines’ flights will be on Mondays, Wednesdays, Fridays and Saturdays, departing LAX at 11 a.m. and arriving in BZE at 5.30 pm. The return journey departs BZE at 10 a.m. the following day and arrives back in LAX at 1.30 p.m. The route will run until May 24, 2022.