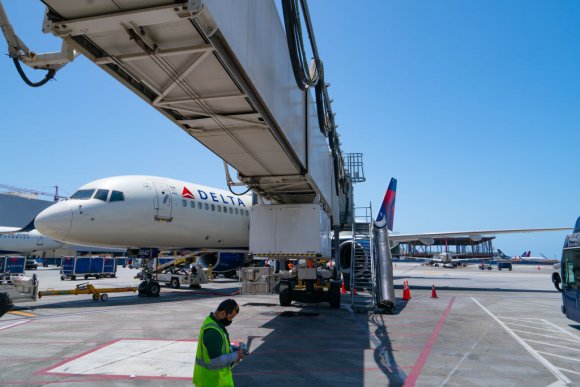 Daily passenger throughput at US airports has been approaching the 2 million mark on peak travel days, the latest sign that pent-up demand is fueling a rebound in domestic route networks.

Passenger numbers screened by the Transportation Security Administration (TSA) hit 1.96 million on May 28, the highest daily total in more than a year. May 31 was nearly as good, with TSA counting roughly 1.9 million passengers.

Approximately 1.72 million people flew each day on average in the US during the seven-day period ending May 31, the highest weekly figure in more than a year. Still, that amounted to a roughly 30% reduction from the 2.41 million average daily passengers in the same week in 2019. While domestic routes are rebounding with a leisure traffic surge, lost business passengers and long-haul international passengers account for much of the difference from pre-pandemic times.

“Air travel is moving closer and closer to a recovery level in passenger traffic, and that signals a return to near-normal times for airports,” Fitch senior director of North American airports Seth Lehman said during a May 27 webinar. “That means that, once again, we live with lines for check-ins and long waiting times to pass through security and crowded flights.”

But while US airports are seeing recovery across the board, the rate of recovery has been uneven by airport size, according to Lehman. Unlike in prior downturns, the largest hub airports have been underperforming mid-sized airports on a relative basis due to their dependence on business travel and long-haul international traffic flows. In coming months, Lehman predicted a “substantial narrowing” in that performance gap, driven by improving vaccine rates in the US and abroad.

Bloomberg Intelligence analyst George Ferguson predicted airline capacity in the 2021 third-quarter (Q3) could top 90% of 2019 levels, up from 79% in the second-quarter (Q2), driven by strong leisure travel demand. Ferguson forecasted that United Airlines would grow its schedule by 30% in Q3 from Q2 levels, with American Airlines and Delta Air Lines growing 16% and 11% on a sequential basis, respectively. Southwest Airlines, meanwhile, could grow capacity by 10% in Q3, bringing its schedule within 90% of 2019 levels.

US airlines are bullish about the state of the recovery this summer. Delta management said at a recent investor conference hosted by Wolfe Research that domestic leisure demand should reach pre-pandemic levels in June, with load factors in the mid-80% range. Alaska Airlines said at the same conference that it anticipates breaking even on a pre-tax basis in Q2, and reaching profitability in Q3.