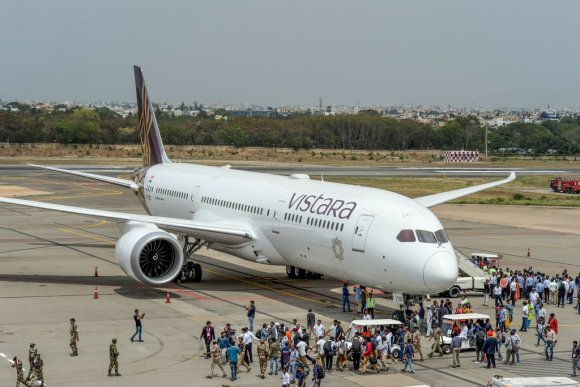 The US Department of Transportation (DOT) has granted Vistara tentative approval to begin scheduled operations between India and the US.

A filing from the government body said it was in the public interest to grant the Gurugram-based airline a foreign air carrier permit, adding the company is “fit, willing and able” to perform services between the two countries.

Final approval should be given before the end of the month, providing there are no objections.

Vistara, a joint venture between Tata Sons and Singapore Airlines, previously indicated that US flights could start as early as September.

Vistara currently schedules the 787-9s on its recently launched long-haul routes to Frankfurt (FRA) and London Heathrow (LHR). From June 16, the airline will also use the aircraft between Delhi (DEL) and Tokyo Haneda (HND), offering a 1X-weekly service.

Although Vistara has yet to outline its planned US network, the DOT approval gives permission to serve “points behind India via India and intermediate points to a point or points in the United States and beyond.”

Data provided by Sabre Market Intelligence shows that O&D traffic between India and the US totaled 2.2 million two-way passengers in 2020, down from 5.7 million during the previous 12 months.

Mumbai-New York was the biggest O&D market last year, followed by Delhi-New York and Delhi-San Francisco. Ahmedabad-New York was fourth, despite the absence of nonstop service.

However, while final DOT approval would allow Vistara to begin serving the US from the third quarter of 2021, a travel ban between the US and India remains in place following a surge in COVID-19 cases across the South Asia country.

The ban, which came into effect on May 4, means most non-US citizens that have been in India for any or all of the last 14 days are blocked from entering the US.

Analysis of OAG Schedules Analyser data shows that there are eight nonstop services operating between India and the US this week (w/c May 31, 2021).