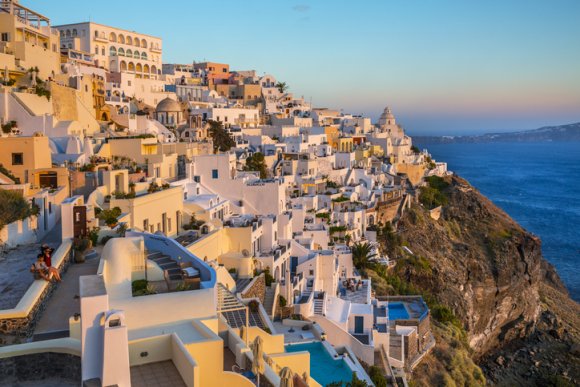 Etihad Airways is the latest Gulf carrier to increase flying to leisure destinations in Greece and Spain this summer. Three new nonstop seasonal routes are being launched from July, connecting Abu Dhabi International (AUH) with the Greek islands of Mykonos and Santorini, alongside the southern Spanish city of Malaga in Andalusia.

Mykonos (JMK) will operate between July 8 and Sept. 11 and Santorini (JTR) between July 9 and Sept. 12. Both destinations will be served twice a week on board Airbus A320s. Malaga (AGP) will also receive two flights each week from July 9 through Sept. 15 using Boeing 787-9s.

Looking at the planned Greek routes, Etihad currently operates a 2X-weekly service to the country’s capital Athens (ATH), with flights scheduled to increase to 3X-weekly from w/c June 14. The airline will face no direct competition on AUH-JMK although LCC flydubai is starting a 3X-weekly service to Mykonos from Dubai International (DXB) on June 18.

Etihad will face direct competition between Abu Dhabi and Santorini, however, when Wizz Air Abu Dhabi begins a 2X-weekly service on July 2. The route is one of three to Greece being started by the ULCC alongside flights to ATH and Thessaloniki (SKG).

The launch of the new routes follows a travel corridor established in May between the United Arab Emirates (UAE) and Greece. Under the agreement, passengers holding vaccination certificates issued by health authorities can travel to Greece without having to quarantine on arrival. The same rule applies for travellers flying from Greece to the UAE.

Sabre Market Intelligence data shows O&D traffic between the UAE and Santorini was just 2,400 two-way passengers in 2019. However, all traffic was indirect. Etihad will clearly be hoping its new nonstop service will cater for leisure demand to quarantine-free destinations.