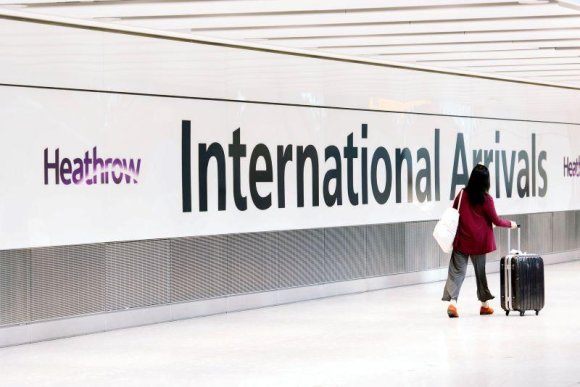 Six airline CEOs have called on the UK and US governments to set an example to the rest of the world by opening a travel corridor that would prove the economic and personal benefits of strong vaccination programs.

The CEOs of American Airlines, British Airways, Delta Air Lines, JetBlue Airways, United Airlines and Virgin Atlantic, along with the CEO of London Heathrow Airport and the CEO of the US Travel Association, held a joint press conference June 7 urging government leaders to open a US-UK travel corridor as soon as possible so that they do not lose a second consecutive peak summer season.

In 2019, some 5 million people traveled between the two countries, but capacity today is at just 15%. Heathrow CEO John Holland-Kaye said the UK was losing £23 million ($33 million) per day while the border remains effectively closed.

Travel between the US and UK is prohibited for most people in the UK because the US is listed as “amber” on the British government's new traffic-light system, meaning people can only travel for specific, non-leisure reasons and they must comply with a 10-day quarantine rule. The US, meanwhile, still includes the UK on its so-called 212(f) order, meaning only US citizens can enter from the UK.

The airline and airport CEOs pointed out that the US and UK have some of the highest vaccination rates, with over 60% of the eligible adult American population and 40% of UK citizens having received at least one vaccine shot.

“There needs to be a prize for that to show other countries there is a benefit to taking the lead so that you can travel and get back to business as normal,” Holland-Kaye said.

Delta CEO Ed Bastian pointed to the ability to travel freely as “a great incentive” for people to get vaccinated, and also that it could help the US meet its threshold of a 70% vaccination rate.

The call for a US-UK travel corridor was timed around a number of events. US President Joe Biden meets with UK Prime Minister Boris Johnson this week ahead of the UK hosting a G7 Summit that will also include the leaders of Canada, France, Germany, Italy and Japan.

The UK government had also targeted June 21 as a potential date for lifting all lockdown restrictions, while the US is looking to make July 4—a national holiday marking Independence—a coronavirus “freedom” day.

Thirdly, the all-important summer season has begun, but months-long talks about opening a travel corridor have failed to materialize even as other European countries—notably popular tourism destinations Greece and Italy—are open to American tourists, with France expected to follow suit this week.

By comparison, Holland-Kaye noted that Heathrow’s second runway was closed Monday because of lack of flights; before the pandemic, there were daily flights from Heathrow to more than 30 US cities.

But the airlines face headwinds in persuading government leaders to move quickly. On June 4, the UK abruptly downgraded Portugal from green to amber. Portugal was one of only a handful of countries to make the green list about a month ago and there was an immediate surge of bookings, most of which would be canceled. And UK health minister Matt Hancock told Sky News on June 6 that it was “too soon” for the government to say if it would stick to the June 21 restrictions lifting plan.

US Travel Association CEO Roger Dow stressed the economic and jobs importance of getting international travel re-established, saying “when people get on planes, that’s when deals get done.” Duncan Edwards, CEO of BritishAmerican Business and the moderator of the CEO press conference, responded that there was a reason the G7 Summit was not being conducted via Zoom. “[Travel] exemptions are granted to politicians but not to the rest of us,” Edwards said.