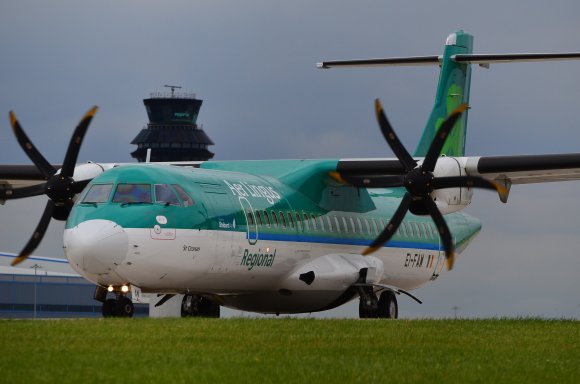 A temporary schedule has been put in place on some of the routes previously served by collapsed carrier Stobart Air, which operated regional flights in the UK and Ireland on behalf of Aer Lingus.

Stobart Air ceased trading late on June 11 and is in the process of appointing a liquidator after plans to sell the airline failed. As a result, all flights were cancelled with immediate effect, leaving thousands of passengers searching for replacement services.

Of the 12 routes served by Stobart Air, seven have been temporarily taken over by International Airlines Group-owned carriers. Aer Lingus mainline has stepped in to operate five, while BA CityFlyer will serve two. The schedule will remain in place for at least the next week.

Routes from Dublin (DUB) to Edinburgh (EDI) and Manchester (MAN) will be operated by Aer Lingus, alongside flights from Belfast City (BHD) to Birmingham (BHX), EDI and MAN. BA CityFlyer is also picking up two routes from BHD, to Exeter (EXT) and Leeds Bradford (LBA).

A statement from Aer Lingus said operations for flights from DUB to Donegal (CFN) and Kerry (KIR) are still being determined, while passengers scheduled to travel on the BHD-East Midlands (EMA), DUB-Glasgow (GLA) and DUB-Newquay (NQY) routes are being offered alternative flights.

Transport and energy group Esken, the owner of Stobart Air, confirmed on June 12 that the airline was being liquidated after a deal to sell the carrier, together with Carlisle Lake District Airport (CAX) in northwest England, had broken down. The decision affects 480 staff.

In an email to staff, Stobart Air MD Andy Jolly said the proposed purchaser, Isle of Man-based Ettyl, had advised Esken that its original funding package “was no longer available.” Following this, Esken said it would not continue to provide financial support for Stobart Air going forward.

A subsequent statement issued by Stobart Air added: “Given the continued impact of the pandemic which has virtually halted air travel since March 2020 and in the absence of any alternative purchasers or sources of funding, the board of Stobart Air must take the necessary, unavoidable and difficult decision to seek to appoint a liquidator.”

Ettyl, run by blockchain and technology entrepreneur Jason Scales, agreed to buy Stobart Air in April 2021. However, doubts about the company’s funding arrangements for the takeover emerged in late May. Scales tweeted on June 12 that the company “fought hard” to rescue the deal and was sorry about the outcome.

Stobart Air, which operated a fleet of 12 ATR 72-600s and a single ATR 42-600, has held the Aer Lingus Regional contract since 2011. However, the franchise deal ends in December next year, with reports suggesting startup Emerald Airlines was already poised to take over the contract prior to Stobart Air’s collapse.

Meanwhile, in a trading update, Esken said it has undertaken certain contingency planning measures and has agreed that it will continue to fund the lease obligations on eight Stobart Air ATR aircraft through to termination of the leases in April 2023.

The business added it would take “immediate steps to seek sublease arrangements for the aircraft with alternative operators to mitigate the impact on the group.”

Esken also confirmed it would also retain the ownership of Carlisle Lake District Airport and plans to “actively explore strategic options for the use of this asset.” In addition, the company said it is in the “final stages” of securing investment into London Southend Airport (SEN).