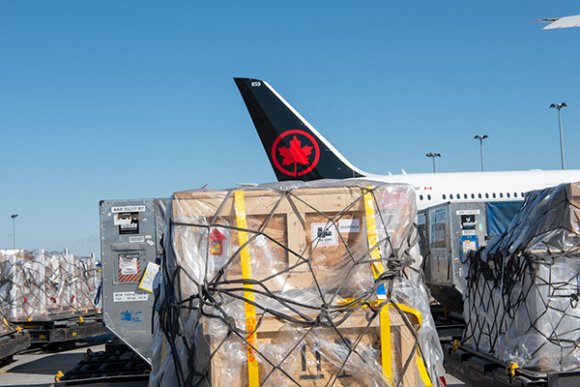 The first of the converted 767 freighters will enter service in October. The aircraft will fly from YYZ to a host of airports, including Guadalajara (GDL), Lima (LIM), Mexico City (MEX), Miami (MIA) and Quito (UIO). It will mark the first time Air Canada Cargo has served GDL.

According to Air Canada, additional airports to be served by 767 converted freighters by early 2022 include Halifax (YHZ) and St. John's (YYT) in Canada, as well as Frankfurt (FRA) and Madrid (MAD).

“These freighters will provide long-term stability and growth for our cargo customers, in particular the freight forwarding community who require reliable air freight capacity year-round,” Air Canada VP-cargo Jason Berry said in a statement. The 767 converted freighters “are an important part of our future growth,” he added.

Air Canada is in the process of converting 767s that have been retired from its passenger fleet into freighters. All passenger seats are being removed from the aircraft, a large door is being cut into the fuselage to allow for loading of palletized cargo, and the floor is being reinforced to carry additional weight.

“Air Canada Cargo plans to have two freighters in service by the end of 2021, with more to join the fleet in 2022,” the airline said. “With these freighters, Air Canada Cargo will enhance its capabilities to transport goods such as automotive and aerospace parts, oil and gas equipment, pharmaceuticals, perishables, as well as handling the growing demand for fast, reliable shipment of e-commerce goods.”

Since the COVID-19 pandemic hit in March 2020 and forced many of Air Canada’s passenger aircraft to be taken out of service, the Montreal-based carrier has operated more than 9,000 all-cargo flights using its widebody passenger aircraft, as well as temporarily modified 777 and Airbus A330 aircraft.

The airline noted that all international cargo routes remain subject to government approval.