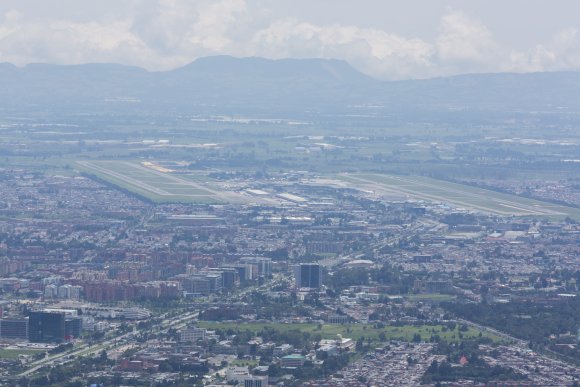 Volaris has been given the green light to start four routes, two of which are from Mexico City (MEX) and two from the vacation resort of Cancun (CUN). Permission has been granted for 4X-weekly flights between MEX and Bogota (BOG) (pictured), as well as a 2X-weekly service between MEX and Medellin (MDE). A 3X-weekly CUN-BOG route and a 2X-weekly CUN-MDE service have also been approved.

The latest schedules data provided by OAG shows that Volaris intends to begin MEX-BOG on Oct. 6, with flights between CUN and Colombia’s capital starting a day later. Both routes will use Airbus A320s.

Mexican rival Viva Aerobus has also been cleared to enter the MEX-BOG market, operating 7X-weekly. Flights are scheduled to commence on Aug. 21 with A320s.

Before the pandemic, Avianca, Interjet and Aeromexico were the market leaders between Colombia and Mexico, collectively controlling 96% of the 1.7 million scheduled seats during 2019, according to OAG data.

Now, with Avianca and Aeromexico undergoing restructuring programs and the ongoing suspension of Interjet’s operations, airlines like Volaris and Viva Aerobus are seeking to capture market share.

Jetair Caribbean has also secured approval for two routes linking Curaçao (CUR) with MED and Barranquilla (BAQ). Both services can be operated twice a week.

The latest route approvals follow a flurry of new international services from Colombia that have started or are scheduled to begin over the coming weeks as the country’s aviation market continues to recover.

OAG data shows that by early August, Colombia’s international market will total about 122,000 weekly departure seats. This is equivalent to around 69% of the seats available during the same week two years ago.