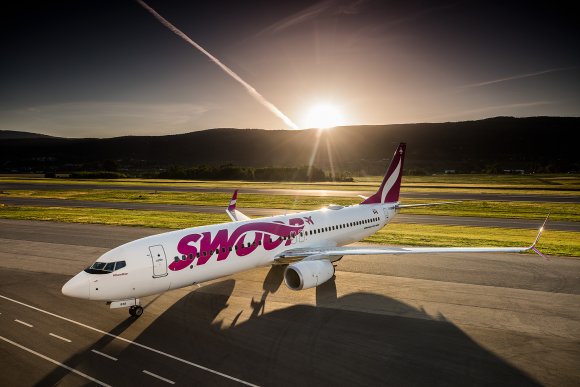 Canadian ULCC Swoop plans to add three new sun destinations in the US to its network this winter with nonstop flights to St. Pete-Clearwater (PIE) and Orlando Sanford (SFB) in Florida, as well as San Diego (SAN) in California.

The expansion comes as the airline readies to celebrate its third anniversary of flying on June 20. The new destinations are also the first international additions to be announced following the WestJet subsidiary’s Request for Proposals (RFP) on Route Exchange, which sought to find new airport partners in North America, Central America and the Caribbean.

Three new routes are being launched to Orlando Sanford, the first of which begins on Oct. 9 from Toronto Pearson (YYZ), operating four times per week. Flights from Hamilton (YHM) start on Nov. 1 and service from Edmonton (YEG) begins on Nov. 5, with both routes operating twice a week.

“We were in talks with Swoop pre-pandemic and are happy they are still committed to providing non-stop service between Edmonton and San Diego,” San Diego County Regional Airport Authority president and CEO Kimberly Becker said. “We anticipate this route will be popular for Canadians as they look to escape the snow and take in the Southern California sunshine."

Prior to the COVID-19 crisis, Swoop offered routes to Fort Lauderdale (FLL), Orlando (MCO) and Tampa (TPA) in Florida, while the state of California was unserved by the carrier.

Although the border between Canada and the US remains closed for non-essential travel, pressure is mounting on the Canadian government to ease restrictions as the country’s vaccination program progresses. Swoop said it continues to see an increase in demand for travel to the US as Canadians look to book a winter getaway south of the border.

Swoop will operate all nine of its Boeing 737-800NGs on domestic flights this summer, with a tenth aircraft joining the fleet this coming winter. A total of 15 domestic routes are planned for the 2021/22 winter season, including flights to Halifax (YHZ) from YYZ which resume on July 16.

As well as the six new US services, the ULCC will this winter operate four other transborder routes connecting Phoenix-Mesa (AZA) with Edmonton, Toronto and Winnipeg (YWG), alongside flights between Edmonton and Las Vegas (LAS).

Twelve international routes are also planned—all of which are to warm weather vacation destinations. The services include flights to Cancun (CUN), Mazatlán (MZT) and Puerto Vallarta (PVR) in Mexico, as well as Montego Bay (MBJ) in Jamaica.

Swoop launched an RFP with Routes during summer 2020 to help identify new airport partners. The proposed services to St. Pete-Clearwater, Orlando Sanford and San Diego are the first international routes to be announced following the process. The first domestic routes were unveiled earlier this year.

“Our Routes airports RFP was done to identify strategic airport partners interested in stimulating demand. We received an overwhelming response from airports keen on planning the recovery together,” Swoop head of commercial and finance Bert van der Stege said.