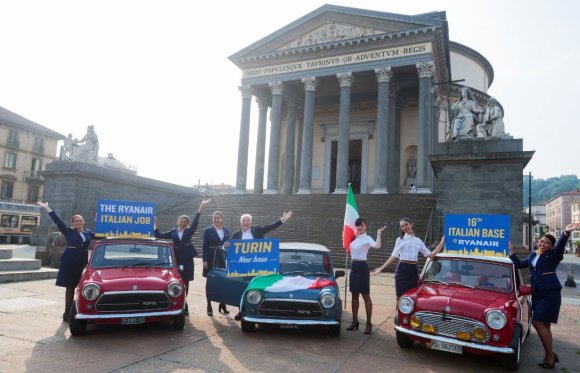 Just days after Wizz Air unveiled plans to open a sixth Italian base in Naples, rival Ryanair has confirmed the launch of a new base in Turin.

The Irish airline will station two aircraft at Turin Airport (TRN) from November 1 and start 18 new routes to 13 countries across Europe, North Africa and the Middle East. The base will become the ULCC’s 16th in Italy and allow the carrier to more than double the number of services offered from the airport.

A total of 32 routes will be available during the 2021/22 winter season, connecting Turin with 23 international and nine domestic destinations, including Budapest (BUD), London Luton (LTN) and Palma de Mallorca (PMI). Most of the new routes will be served 2X-weekly, with Ryanair planning to offer about 123 weekly flight departures from TRN this coming winter.

“We have enjoyed a great partnership with this airport since our first ever flight from London Stansted to Turin in 1999 and we are very pleased to continue growing in the region after 22 successful years,” Ryanair DAC CEO Eddie Wilson said.

“As vaccination rollout programs continue throughout the coming months, we want to continue supporting the economic recovery as well as regional and international connectivity across the country and position Turin as a leading winter destination—both as a charming city break and a gateway to some of the best Italian ski resorts.”

Turin Airport CEO Andrea Andorno added the new base was a “fundamental step” that will help the city of Turin—and the wider Piedmont region—recover from the impact of the pandemic.

Milan Bergamo (BGY) is Ryanair’s largest base in Italy, followed by Bologna (BLQ) and Rome Ciampino (CIA). OAG Schedules Analyser data shows TRN is currently the 15th largest destination in Italy served by the carrier, with around 350,000 departure seats scheduled for this summer.

Overall, Ryanair expects to fly 2.8 million seats from and within Italy in July, compared with 2.6 million provided by the group’s carriers in July 2019.

The planned expansion comes as LCCs continue to rapidly increase their influence on Italy’s skies amid the ongoing restructure of Alitalia. Alongside Ryanair’s growth, Hungary’s Wizz has been aggressively adding capacity, while Spain’s Volotea has also bolstered its presence.

Earlier this week, Routes reported that Wizz is adding a sixth Italian base in Naples—less than a year after opening its first in the country. Two Airbus A321s will be based at Naples Airport (NAP) in August and September, facilitating the start of 18 new international and domestic routes.

The carrier opened its first Italian base at Milan Malpensa (MXP) last July and has since added bases at Bari (BRI), Catania (CTA), Palermo (PMO) and Rome Fiumicino (FCO).

Meanwhile, Volotea this month added a new base at Olbia (OLB) in Sardinia, becoming its seventh base in Italy and 17th overall. A string of new routes have also been announced for the summer season, including the carrier’s first from Milan Linate (LIN).

Analysis of schedules data for July 2021 shows that 5.8 million low-cost departure seats from and within Italy are planned, compared with 5.9 million during July 2019, equating to a reduction of just 1.7%. For mainline carriers, the decrease is more pronounced, with 3 million seats on offer next month, down from 6.1 million two years ago.

Over the same time periods, Alitalia’s capacity from and within Italy is down from 2.29 million seats to 1.1 million—a reduction of 52%—while easyJet’s more cautious approach to the recovery sees its scheduled capacity 35% lower next month compared with July 2019.