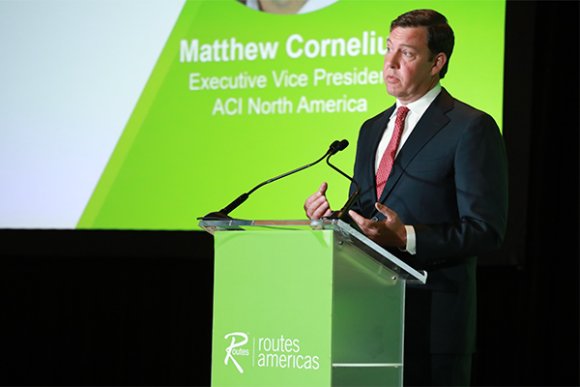 It is imperative that the US and Canadian governments take action now to restore connectivity to the rest of the world, said ACI-NA EVP Matthew Cornelius (pictured).

This lack of connectivity is “the biggest hole in our business” and “a huge problem that remains unsolved,” Cornelius told the Routes Americas 2021 conference on June 23.

“The US and Canadian governments need to move forward on finding ways to reopen the borders with each other, and the rest of the world,” he said. “It’s about facilitating the global economy, but even more so about reconnecting families and loved ones. And it needs to happen now.”

Cornelius said that while governments acted quickly to close borders when the COVID-19 pandemic started, no “off ramps or exit strategies” from these restrictions have been put in place.

The US government has “wasted a lot of time” discussing issues that are “impractical and unfeasible,” Cornelius said, citing the example of daily discussions on a domestic testing policy for air travel when “we didn’t have testing for normal people, let alone the millions of people that were going to fly.”

As a result, there exists a “patchwork of regulations, approaches and rules that aren’t synchronized and create a lot of confusion.”

“The US has the opportunity, as the birthplace of aviation, to be the leader in the recovery and how to reopen borders.”

Cornelius said that the European Union has made good progress on coordinating across member states, “setting up a system and using facts and data allow travel to happen again.”

“I would have thought that might be something the US government would take leadership on, but they’re not,” he said.

Meanwhile, in Canada airports are accumulating debt and airlines have not been supported to the level of their counterparts in the US and elsewhere in the world. The government must “step up and support them,” he said.

For almost all Canadian ACI-NA members, 2021 is on track to be worse financially than 2020, and there exists a “misunderstanding” of the role aviation plays in “their culture, their economy, and the importance that airports play in helping serve those communities,” he said.

“They’ve created a system now in which for a Canadian looking to vacation, it’s easier to go to Greece, France or anywhere in Europe than it is to go from Atlantic Canada to British Columbia,” Cornelius said. “The impact to the Canadian economy is mind-boggling.”

Overall, governments must adapt to a system whereby air transport can “minimize the risk of COVID-19 transmission in air travel and allow us to reconnect” as they have with other security threats, Cornelius said.

“The approach we see is looking to completely eliminate the risk of transmission of COVID in air travel, and that’s not achievable.

“The current approach is not working; it has been bad for people, bad for businesses and bad for economies.”