Kevin Chan, Swoop’s leader of network and business planning, has used the pandemic to reassess the Canadian ULCC's network strategy and seek out new opportunities.

How has your network changed over the past year?

When the pandemic hit, we realized that we needed to adapt very quickly. We have nine aircraft in our fleet and the utilization went from around 14 hours per day to hardly anything. It was obviously really important to cut our flying so drastically as we needed to minimize cash burn.

However, that meant in April 2020 our network reduced from flying to four countries with more than 30 routes, to operating a skeleton service between four cities in Canada with just a single aircraft. It was during this time that we decided to take a step back and analyze our network and look at what we could do differently once travel restrictions allowed.

At this point, we decided to engage Routes to help launch a request for proposals (RFP) to find new airport partners in North America, Central America and the Caribbean—basically any airport in range of our Boeing 737-800NGs. We thought it was important to assess our network with fresh eyes and find new, innovative partners we could work with.

What was the outcome of the RFP?

There was an excellent response to the RFP and lots of good engagement with airports that were aligned with our vision. We would have obviously liked to progress some of the new opportunities quicker, but the travel regulations imposed on the aviation industry in Canada have made that very difficult.

However, with the rollout of vaccinations, restrictions are likely to start loosening so now is the perfect time to outline our future plans. One of the big changes we’ve made to our network is how we assess Florida, which is such a massive leisure market for Canadians.

We’ve decided to focus on both Orlando Sanford (SFB) and St. Pete-Clearwater (PIE), rather than some of the more traditional markets like Orlando International (MCO) and Tampa (TPA). There is a lot of competitive differentiation at play with these two Florida alternate airports and we’ve received some fantastic support. It also provides a way for us to differentiate ourselves between the traditional service providers and will enable us to stimulate demand, which is what we’re all about as a ULCC.

Additionally, we’re beginning flights to San Diego (SAN) in California, which is a market we’ve been interested in for quite some time and emerged as an ideal partner during the RFP process. On the domestic front, we’ve also added routes to Victoria (YYJ) in British Columbia from both Toronto (YYZ) and Edmonton (YEG). A good chunk of our traditional network will also resume—routes that have worked well in the past where there is sustained demand and we have a market presence.

Has the process of planning your network changed during the pandemic?

Network planning is obviously very data driven, but many of the traditional methods used to assess market demand have been thrown out of the window, especially in the short-term as the industry recovers. That means you have to be ready to adapt and act accordingly. Thankfully, we’ve been able to do that because we’re small and nimble—we can turn on a dime, unlike many of the larger carriers which are set in their ways.

At the moment, we need to lean on our airport partners because they have so much insight—especially on local trends—that may not be visible to us. That’s not to say that we can forget about historical demand we would usually look at. As we operate the denser 189-seat 737-800s, we need to ensure that there is already sufficient demand—or we will be able to stimulate sufficient demand—otherwise the route will never be sustainable.

Our airport partners can be instrumental in helping us to determine what routes will work and what are likely to be profitable. Identifying services that will be sustainable will result in a win-win situation for both us and the destination.

What support from airports are you seeking as you begin to scale up your flying?

The cost per turn at a lot of Canada’s major airports is through the roof and so we’ve worked hard with some of our partners to look at how we minimize that cost. 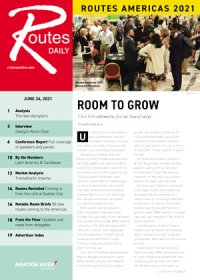 Domestically and internationally, we’re really looking to work with airports to build an incentive structure that aligns both of us to drive volumes. It doesn’t matter if the cost per turn is zero—if there’s no one on the plane we’re still going to bleed. Airport partners therefore need to buy into the ULCC strategy of aligning costs with demand.

What level of demand are you seeing at the moment?

Canadians have been in their homes for a year and a half and so the pent-up travel demand is real. Our forward bookings of late have been very encouraging and I think that will continue over the coming months. This leads me to believe that winter will be the first full season where we’ll start to see a true recovery in air travel.

Do you think there will be any change in the way people travel post-pandemic?

I think there is going to be a marked change in travel behavior—and that presents a very interesting opportunity for us. Canadians have traditionally taken a winter vacation, spending one or two weeks in an all-inclusive resort in a sunny destination. But that’s not how things are in other parts of the world.

In Europe, for example, the idea of a three- to four-day backpacking trip where you just bring a carry-on bag is very common. There is a real opportunity for us to change the narrative of travel in Canada in terms of how people think about vacations. There are a ton of leisure destinations we could offer where you’d be able to hop on a plane for less than $100 and have a three-day trip. That means you’d be able to have three or four shorter vacations a year, rather than just one longer one during winter.

It’s a trend we’ve already seen in the US since the pandemic began—a lot of airlines are running point-to-point domestic services to outdoor leisure destinations that many network carriers haven’t really touched before. If there is a shift in demand like that in Canada, there are a significant number of new routes that we can tap into.