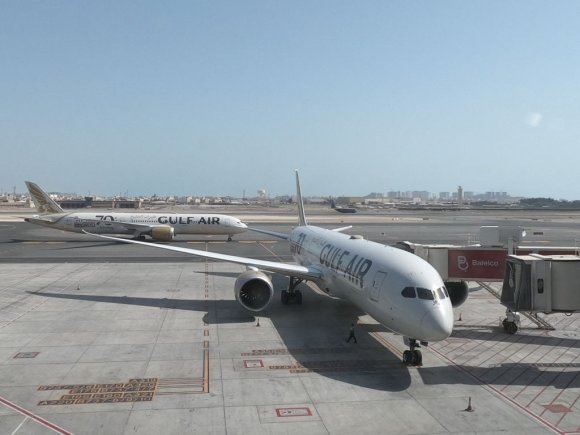 Bahrain’s Gulf Air is eying the launch of more fifth freedom routes as it seeks to expand its operations. The carrier already offers flights between Athens (ATH) and Larnaca (LCA), as well as between Bangkok (BKK) and Singapore (SIN). “We studied the demand between Athens and Larnaca as well as between Bangkok and Singapore to carry passengers between each city pair,” acting CEO Waleed AlAlawi said. “This is the beginning of a wider plan to expand globally and be available and more visible to the local markets in countries that we fly to.”

Wizz Air has based a fifth aircraft at Tirana International (TIA), enabling the launch of direct flights to Barcelona (BCN) and Cologne Bonn (CGN). The airline already connects Albania’s capital with 29 European destinations. Service to BCN starts July 31 and to CGN on Aug. 1. Both routes will be operated 2X-weekly. Wizz opened its TIA base in 2020, initially deploying three aircraft. A fourth aircraft was added in March 2021.

Turkish carrier Corendon Airlines is to make its debut in Scotland in April 2022 with two routes from Glasgow Airport (GLA). Nonstop service will be provided to vacation destinations Antalya (AYT) and Dalaman (DLM), both of which will operate 2X-weekly using Boeing 737-800 aircraft. “This new agreement will provide close to 50,000 seats between Scotland and Turkey for 2022,” said Matt Hazelwood, commercial director of GLA owner AGS Airports.

LCC easyJet is expanding the number of destinations offered from Stockholm Arlanda (ARN). From July 20 through late October, the airline will add flights to Palma de Mallorca (PMI) and Malaga (AGP) in Spain. The PMI route will operate 3X-weekly, while two flights per week will be offered to AGP. In addition, easyJet plans to launch a route to PMI from Göteborg Landvetter (GOT).

Following the UK government’s decision to add Malta to its ‘green list’, enabling quarantine-free travel, easyJet is also adding two new routes from the UK. Service to Malta (MLA) from Bristol (BRS) starts July 9 and from Lonton Luton (LTN) on July 11. Both routes will be 2X-weekly.

Russian LCC S7 Airlines is set to resume flights to Tokyo. From July 6, the airline will restore service between Vladivostok (VVO) and Tokyo Narita (NRT), operating 1X-weekly on Tuesdays using Airbus A320neos. The flight from VVO will depart at 1.30 p.m., arriving in NTR at 2.40 p.m. The return journey departs at 3.40 p.m. and lands back at VVO at 7.15 p.m. OAG data shows S7 last served the route in March 2020.

Scottish regional airline Loganair will launch flights between Aberdeen (ABZ) and Dublin (DUB) on Sept. 5. The route was previously served by Aer Lingus franchise carrier Stobart Air until March 2020. However, Loganair has stepped in to restore flights following the collapse of Stobart Air two weeks ago. Loganair plans to offer a 4X-weekly service on Mondays, Thursdays, Fridays and Sundays using 49-seat Embraer 145 jets. Service will become daily from March 28, 2022.

Canadian ULCC Swoop is adding nonstop service from Victoria (YYJ) in British Columbia to Las Vegas (LAS) in the US and Puerto Vallarta (PVR) in Mexico. Flights to LAS begin on Oct. 31 and will be 2X-weekly on Thursdays and Sundays, while service to PVR will be 1X-weekly on Sundays.

Air New Zealand cargo flights between Melbourne (MEL) and Los Angeles (LAX) will soon be taking off after the airline was awarded the route as part of the Australian Government’s International Freight Assistance Mechanism (IFAM) program. The airline will operate one flight per week until Oct. 31, with the first flight bound for MEL on July 3. This will be in addition to the Brisbane (BNE)–LAX flying the airline has been doing since August 2020 under the same scheme.