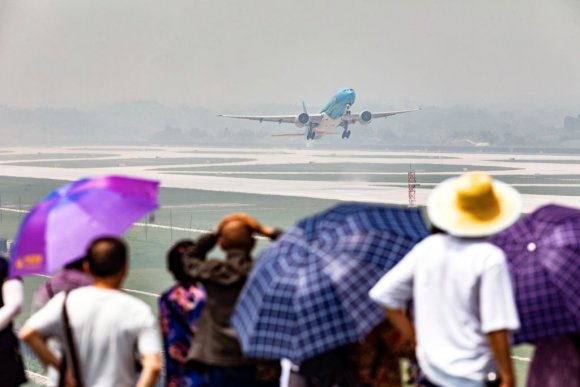 Commercial operations have officially begun at Chengdu Tianfu International Airport (TFU), which has the capacity to handle 60 million passengers per year.

TFU is located southeast of Chengdu, about 50 km away from the center of Sichuan's provincial capital. Construction began in December 2016 and cost about $11 billion to complete.

The airport has three runways and two terminals, covering a total area of 710,000 m². Once future phases have been completed, TFU will have the capacity for 120 million passengers annually.

The new hub will be an alternative gateway for domestic and international passengers, helping to relieve the burden on Chengdu Shuangliu (CTU).

The first flight to depart TFU, operated by Sichuan Airlines, took off at 11.25 a.m. on June 27, bound for Beijing Capital (PEK). About 260 passengers were onboard the inaugural service.

Additionally, Air China’s first routes from TFU connect the airport with Shanghai Pudong (PVG) and PEK. The airline plans to progressively deploy 17 aircraft at TFU, increasing its network to 30 destinations.

Data provided by OAG Schedules Analyser shows that about 81,400 departure seats are available from TFU this week (w/c June 28, 2021) across about 470 flights. Capacity will increase to 150,000 seats by mid-July.

A total of eight airlines are currently offering routes from the airport, nearly all of which are to domestic destinations. The sole international route is to Tokyo Narita (NRT) in Japan, currently served by China Eastern 3X-weekly.