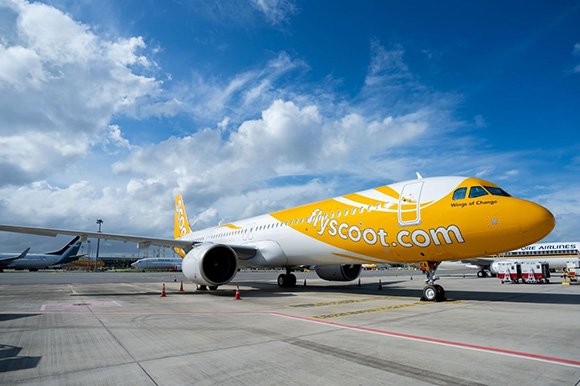 Scoot, the low-cost arm of Singapore Airlines, has debuted its first Airbus A321neo, which it plans to use on routes of up to 6 hr. from Singapore.

The aircraft’s inaugural commercial flight took to the skies on June 28, departing Singapore Changi (SIN) at 3:24 p.m. local time bound for Bangkok Suvarnabhumi Airport (BKK). From August, the aircraft will also be deployed on routes to Mactan–Cebu International Airport (CEB) in the Philippines and Ho Chi Minh City (SGN in Vietnam).

Scoot’s 236-seat A321neo has a range of up to 2,620 nautical miles (nm), or 4,852 km, approximately 270 nm farther than the A320neo. This allows Scoot to deploy the A321neo aircraft on short-to-medium-haul routes with up to 6 hr. of flight time compared to the older-generation A320’s 4-5 hr., thereby opening up more options for new destinations.

With a larger passenger capacity of 236 seats—50 more than the A320neo—and more fuel-efficient engines, the A321neo will also allow Scoot to improve its operating economics and unit costs, enabling the carrier to optimize its fleet utilization to better match capacity to demand.

Scoot said the aircraft can therefore be deployed in place of the A320 during popular seasons, days of the week or flight tranches, or substitute larger Boeing 787s in pockets of softer demand. It can also be deployed to complement some 787 routes to enable higher frequency.

Although Wilson said the carrier is considering new routes for the A321neos, he did not give examples. However, he said possible routes include those previously terminated because of economic factors.

Compared with the A320neo, the range of the A321neo adds more destinations in northern India, as well as the likes of Karachi and Lahore in Pakistan, into play. The airline could also opt to deploy the aircraft on routes to Beijing Capital (PEK), Seoul Incheon (ICN), Fukuoka (FUK) in Japan and Busan (PUS) in South Korea, which are currently served by 787s.

To date, Scoot has taken delivery of three A321neos, leased from BOC Aviation, out of a firm order of 16. Of the 16, six are an upsize from an original A320neo order and 10 are leased.

Scoot has leaned on its widebody fleet during the pandemic because of their ability to carry more cargo. Data provided by OAG Schedules Analyser shows that the airline is this week (w/c June 28, 2021) offering 49,200 seats—a reduction of 80% compared with the same week two years ago. Almost 65% of capacity is on board 787 aircraft, compared with 43% in 2019.

The figures also show that Scoot is currently serving 23 destinations, down from 67 this time two years ago. Flight frequencies are also 83% lower over the same time period.