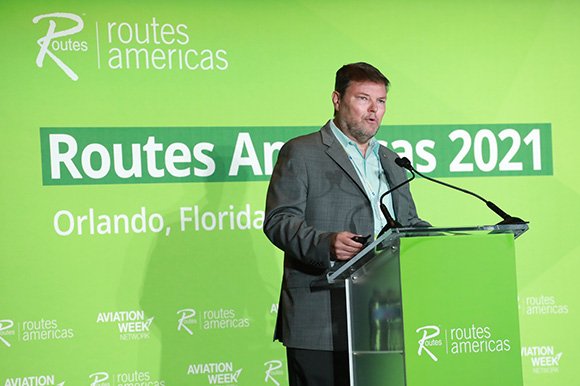 Spirit Airlines is on track to match 2019 capacity levels this year as it gears up for an even bigger period of growth from 2022 onward, according to network planning vice president John Kirby.

Speaking at Routes Americas 2021 in Orlando, Florida, Kirby said the carrier will double its fleet to about 320 aircraft over the next five years—and plans to significantly expand its route map at the same time.

“We were going to be bigger starting in July than we were in 2019, and for the full year capacity will be about the same as 2019,” Kirby said.

“We only serve 52 destinations in the lower 48 [US states]—to put that in perspective, that's less than half of the next two largest ULCCs, even though we're larger than them. We think that there’s a lot of opportunity to add a lot more dots to the map.”

Data provided by OAG Schedules Analyser shows that Spirit is scheduled to operate 4 million seats during July 2021, up from 3.8 million two years ago. Full-year capacity this year is currently listed at about 45 million seats, compared with 42 million during the 2019 calendar year.

“Next year is going to be a massive growth year for Spirit,” he added. “In subsequent years we’ll be growing about 14-17%—sort of that midteen target.”

Kirby said Spirit has been opportunistic during the pandemic, citing the ULCC’s expansion from Los Angeles (LAX) in particular. LAX was the airline’s 10th largest destination two years ago but has now moved up to fourth.

Spirit launched its first ever international route from the Californian airport in May with flights to Los Cabos (SJD) in Mexico, with flights to Puerto Vallarta (PVR) starting in July. “We jumped on those opportunities so that we have room to grow when demand comes back,” Kirby said.