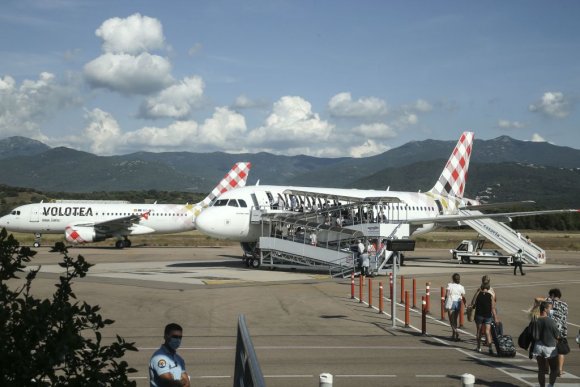 Volotea is entering the second half of the year on the front foot, with plans to increase capacity by 34% compared with pre-pandemic levels and launch more than two dozen new routes.

A deal with Greece’s Aegean Airlines has also been inked that will see the two carriers codeshare on 100 routes across each other’s networks. Aegean becomes Volotea’s second codeshare partner alongside TAP Air Portugal.

The expansion comes as Volotea announced it has now carried 35 million passengers since its first commercial flight less than a decade ago. The milestone was celebrated in Palermo, Italy, in the presence of CEO Carlos Muñoz and fellow co-founder Lázaro Ros, the airline’s general manager.

Muñoz said the company’s growth is testament to a strategy of connecting small and medium-sized city pairs that it views as being underserved. The airline has also ramped up domestic flying since the onset of the pandemic, expanding operations in Italy, France and Spain.

Speaking to Aviation Week Network in late March, Muñoz said Volotea was “laying as low as we can” during the first half of 2021 but expected to ramp up capacity during the second half as vaccination programs progress.

That appears to be the case with plans to offer about 6.4 million seats during the next six months—a rise of 34% compared with the second half of 2019. The airline, which inaugurated its first Airbus A320s in April, also intends to further grow its network.

According to data provided by OAG Schedules Analyser, Volotea started 25 new routes in the six months to June 30 and has scheduled a further 29 to begin before the turn of the year. They include eight from Lyon St-Exupery (LYS) and seven from Marseille (MRS).

“This agreement will offer both Volotea and Aegean a considerable growth opportunity since all the routes selected have no overlap,” Muñoz said. “We selected routes that we believe our clients will be very interested in and have been able to put together a very important number of destinations, which will cater for the increased offer of this summer.”