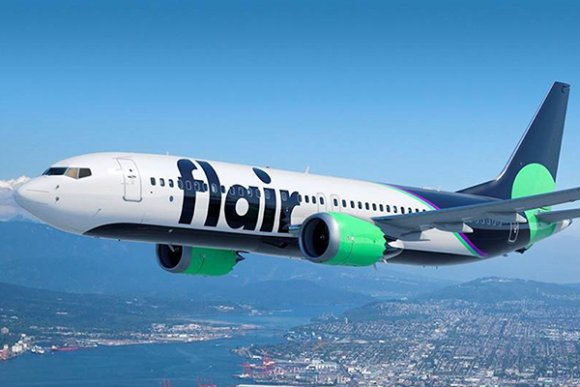 Fast-growing Canadian ULCC Flair Airlines plans to launch non-stop service to the US from Oct. 31, the Edmonton, Alberta-based carrier has announced.

Jones is leading Flair through a major reset and rebranding since joining as CEO in 2020, focusing the company on scheduled ULCC operations. Jones was previously MD and deputy CEO at Hungary-based ULCC Wizz Air and before that chief strategy networks and alliances officer at Air New Zealand.

He said his aim was to grow Flair from its current fleet of eight Boeing 737s to 50 aircraft in five years. That growth will hinge on the 737 MAX; the airline has five 737-8s in service and expects to take delivery of another three in the next three weeks, Jones said.

Flair operated to the US under its former management and branding, when it also operated charter services, but terminated those services.

The new Flair US services were announced as Canada remains under highly constrained travel restrictions related to the pandemic, with the US-Canada border still effectively closed. But Jones said he was confident the restrictions would be lifted by the end of October and the offer of low fares to popular US leisure destinations in late fall was timed “to take advantage of Canadian desire to go somewhere warm.”

The extension into the US will occur as Flair also continues to expand its Canadian network.

“It’s not a question of Canada or the US; we will do both and continue to fill out the Canada network,” Jones said. “I think it’s important as an airline to expand our network to the US. We have confidence in our cost base and our ability to provide great service.”