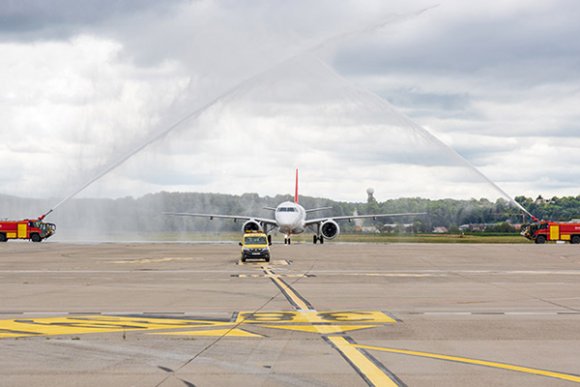 Helvetic Airways and Lufthansa LCC subsidiary Eurowings have announced they are exploring additional niche markets in the leisure segment.

Helvetic will base one Embraer E190 and one E195-E2 along with 20 crew members at the tri-national airport, which sits where the borders of France, Germany and Switzerland intersect. Helvetic becomes the first Swiss airline to open a base at BSL since May 2015.

Aviation Week Network understands that Helvetic plans to operate weekend air services with the aircraft to Jerez (XRY) in Spain, Larnaca (LCA) in Cyprus and the Greek island of Santorini (JTR) during the rest of summer 2021.

“We’re firmly convinced of the potential that the EuroAirport holds for our flight operations,” Helvetic Airways CEO Tobias Pogorevc said.

Helvetic has recently taken delivery of the first of four E195-E2s, becoming the first operator worldwide to fly both the E190-E2 and the larger E195-E2 variant. Helvetic’s first E195-E2 commercial flight was on July 10 from its new base to Santorini.

Starting Dec. 4, up to 2X-weekly services will be launched from Eurowings’ Dusseldorf (DUS) base to Tromso (TOS) in Norway, within the Arctic Circle. This will be followed by a service from DUS to Rovaniemi (RVN), the capital of Finland’s northernmost Lapland province, from Dec. 5.

From Stuttgart (STR), Eurowings is set to operate to northern Sweden by starting 2X-weekly services to Lulea (LLA) from Dec. 1, followed by a weekly service to Kiruna (KRN) from Dec. 4.