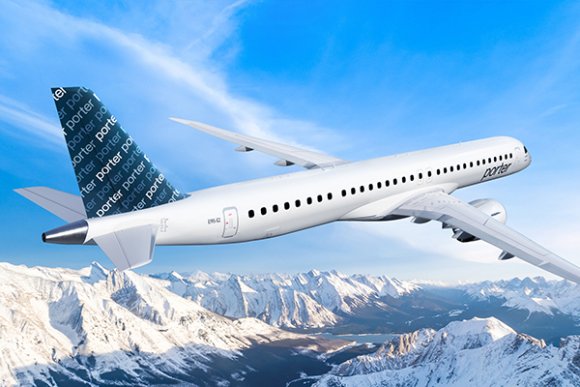 Porter Airlines has revealed plans for a major network expansion in North America from 2022 after confirming an order for 30 Embraer E195-E2s and purchase rights for 50 more.

The Toronto-based airline did not unveil specific routes but said the expanded service will “include the west coast, and sunny spots in the southern United States, Mexico and the Caribbean.”

Porter said it plans to operate its jets from four Canadian bases: Halifax (YHZ), Montreal (YUL), Ottawa (YOW) and Toronto Pearson (YYZ). While the Toronto flights will be from YYZ, Porter plans to maintain its traditional base at Toronto’s Billy Bishop downtown airport (YTZ) from where the airline operated its fleet of 29 De Havilland Dash 8-400s before it suspended operations in March 2020 due to the COVID-19 pandemic. The airport’s operating agreement bans commercial jet flights.

“We are bringing Porter’s distinct style of service to dozens of new North American cities,” Porter President and CEO Michael Deluce said. “We believe that now is the right time to make this investment as the pandemic resets the aviation landscape. Adding a diverse selection of popular business and leisure destinations to our network means that we are better positioned to serve the needs of many more passengers.”

Porter’s announcement emphasized that its Billy Bishop operations “remain core to its business and will continue with high-frequency regional service on turboprop aircraft.” The airline recently unveiled plans to restart service in September to both Canadian and select US cities.

“Our commitment to Billy Bishop Airport is not changing,” Porter founder and Executive Chairman Robert Deluce said. “Our corporate headquarters at Billy Bishop is being maintained and we will continue serving the same network of regional markets from downtown Toronto.”

The carrier’s plans now call for it to recall about 500 employees to restart Dash 8-400 service in two months and then steadily ramp up and begin taking the E195-E2s in about 12 months. Besides restarting operations after an extended hiatus, Porter’s challenges include a court battle with Nieuport, operator of Billy Bishop terminal, over whether the airline must pay for unused slots—an issue that grew more complex when Porter paused its operations. It also may face direct competition at Billy Bishop from US startup Connect Airlines that is eyeing Dash 8-400 service between Toronto and US business centers.