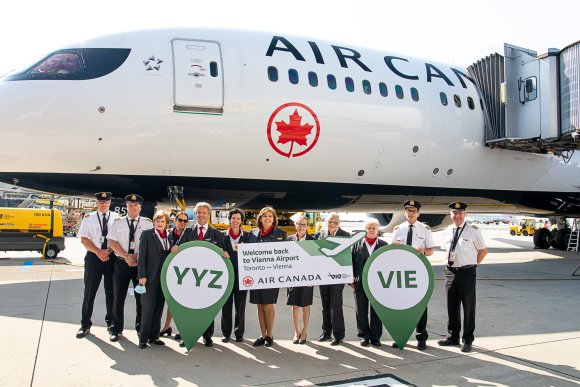 Air Canada has resumed flights to Vienna (VIE). The route from Toronto (YYZ) will operate three times per week on Mondays, Thursdays and Saturdays using Boeing 787-9s. The resumption comes as Canada prepares to open its borders for fully vaccinated European travelers effective Sept. 7. “Step by step, intercontinental, long-haul air traffic is coming back,” said Julian Jäger, member of the management board of Flughafen Wien. “The return of Air Canada to Vienna represents an important step for Vienna and for Austria as tourism locations and we are pleased to once again welcome more overseas guests to our country.”

AirAsia Philippines has vowed to restore its route network from Clark International (CRK), hopefully before the end of the year. Pre-pandemic, the LCC flew to 10 domestic and three international destinations from Clark: Cagayan de Oro, Caticlan, Cebu, Davao, Iloilo, Puerto Princesa, Tacloban, Incheon, Kaohsiung, and Taipei. “Once travel restrictions ease and demand picks up soon, we are eyeing to strategically restore AirAsia’s Clark hub hopefully by Q4 of 2021,” CEO Ricky Isla said. The carrier renewed its commitment to CRK during an event attended by Philippines president Rodrigo Duterte to showcase the airport’s new terminal building.

Following “increasing demand for flights to Southeast Europe," Austrian Airlines has expanded service between Vienna (VIE) and Pristina (PRN) in Kosovo. Starting July 20, the airline has been offering up to 3X-daily flights between the destinations. Service from Vienna departs at 10 a.m., 12.35 p.m. and 10.55 p.m. “With our dense flight schedule to Southeast Europe, we are strengthening the position of our Vienna hub for international connections," CCO Michael Trestl said.

Air Seychelles will begin operating to Almaty (ALA) in Kazakhstan from August. The series of charter flights, to be operated by Airbus A320neo aircraft with 168 seats, is expected to bring more than 500 visitors to the Seychelles. The first flight departing ALA is scheduled for Aug. 2.

Jet2.com has added more flights from the UK to Madeira and Malta in response to “very strong demand” from passengers. With both islands on the UK government’s "green list"—meaning travelers do not have to quarantine on arrival back in the UK—frequencies are being increased from Birmingham (BHX), Leeds Bradford (LBA), Manchester (MAN) and London Stansted (STN). To Madeira (FNC), a new Friday service is being added from both BHX and LBA during September and October, increasing each route to 2X-weekly. A Saturday service between MAN and FNC is also being launched, expanding flight frequencies to 3X-weekly. To Malta (MLA), Jet2 will add a Saturday flight from MAN in September, meaning 4X-weekly services, as well as adding a 2X-weekly route from STN.

Spanish startup UEP! has begun commercial operations. The airline, whose name means "hey" or "hello" in the Catalan dialects spoken in the Balearic Islands, is offering flights between Mallorca (PMI), Menorca (MAH) and Ibiza (IBZ) using ATRs. The carrier is owned by Madrid-headquartered scheduled and charter flight operator Swiftair.

Volaris expects its new El Salvador franchise to start operating flights in the third quarter of the year. President and CEO Enrique Beltranena said Volaris El Salvador would offer the “traffic rights to connect El Salvador more directly with the US without the use of freedoms through El Savador, which will give us new avenues of growth in Central America.” Volaris Costa Rica, meanwhile, is adding one aircraft later this year to make a total of three, which will bring the airline back in line with its pre-pandemic operating levels.

Bahrain’s Gulf Air has restored 80% of its pre-pandemic route network as it enters the peak summer travel period. A series of seasonal destinations have been launched, with direct flights to Mykonos (JMK) and Santorini (JTR) in Greece; Malaga (AGP) in Spain; and Alexandria (ALY) and Sharm El Sheikh (SSH) in Egypt. It has also recently resumed services to the Georgian capital Tbilisi (TBS).