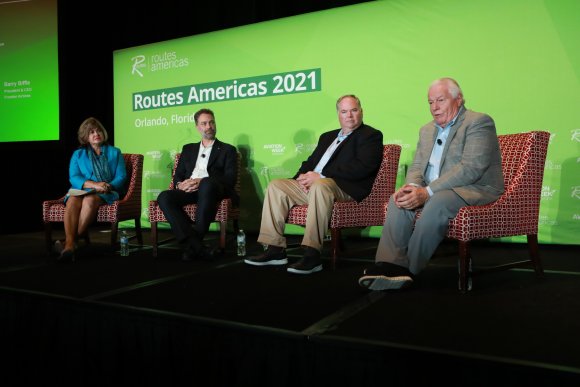 What have you done to pivot since the pandemic started, and will any of it remain in the future?

Last year we had the pandemic, then we all thought it was going to get better, and then in June it all went downhill again. We were just on this rollercoaster of constantly adding flights and taking them back out.

So we had to get our processes together but ultimately, we got sick of it. One of the takeaways that we did to change our business is we're much more modular now and we're opening more and more crew bases as a result.

You carry that inefficiency, but it also just makes you so much more flexible. And we're finding that more bases are going to make us more desirable for pilots and flight attendants.

And now what's even more awkward is having a mix, with some people in the room and then having people on Zoom. That's a mess.

I think Zoom and Teams are good for our business and better than just a phone call, but the truth is there's no replacement for in-person, getting together and seeing people smile.

Let's get everybody back traveling because I've met people in the last year over Zoom but you don't get to really know them.

We've got to lead the way as an industry to make sure that everybody gets back travel, because it's important. It's a big part of human beings. And it’s how business gets done.

During COVID-19 legacy carriers have added more leisure destinations and are going into some of your markets. How soon do you think that those legacies will pull back?

I think we're already starting to see it. If you look at airports now you see more people charging their laptop sat by themselves; that tells you people are starting to travel for business.

It's going to be no different than leisure travel. There's not only pent-up leisure demand—there's pent-up business travel. People need to go see all their clients in the back half of this year that they would normally see in a year.

I think it's going to be fantastic for the hotel business and the legacy space.

Budget carriers for a very long time have avoided some airports because of high costs, but some of those have been important destinations during the coronavirus. What is your optimal environment?

Cheaper is better. The concrete doesn't care so stop charging by weight, charge by movement. An RJ or even smaller takes up the same space, often even more because they're slower. Do yourself a favor: charge by movement and you'll get more passengers, that’s what gets you more concessions and economic activity. It's the best and highest use.

It’s the same thing we've been saying about slots for a long time, as an industry—stop putting a 37-seater in there when you can put in a 200-seater.

We have not quite 110 aircraft today and 150 on order so we'll double the size of the business. We’ve grown by 10% to 20% per year for the last five years and that will continue.

So we have plenty of aircraft coming and we’ll be glad to talk to airports and destinations about growth opportunities, and those conversations already taking place.

We fly to 60-odd destinations nonstop from Orlando and we'll continue to add more.

We're going to see how that the situation with people working from home works out. We all have our opinions of how it should be, but the markets are telling you that whether you like it or not there's going to be more people working remote.

That’s a decentralization of a lot of cities and we’re going to see a lot of smaller and mid-size cities becoming much more attractive for real estate, lifestyle, and so forth.

But I think what's going to happen, if this is even partially successful, you're going to have more reasons to have meetings and training. We're looking at this ourselves; what percentage of our workforce are going to be completely remote and how will we do that? Will they come in once a quarter or twice a year?

You're going to have meetings that I think you didn't have before, so I think somewhere like Orlando is going to really benefit from that, because it’s one of the few places in the US that has nonstop service to practically everywhere.

If we fast-forward a year, what are the main issues you’re going to face?

We’re not worried about oil prices or pilot shortages; we drink less fuel than anybody per passenger and we get 20 applications for every job.

I think the big issue you're going to run into will be a broader workforce challenge that's going to face the travel industry for some time. It would be great to get more people attracted to this space but unfortunately, you've got a bunch of people that were burned.

They no longer want to be a waiter, work for that hotel or that airline. That's going to be a challenge that's going to face us for a while. You've got this low-skilled wage inflation hitting all parts of the economy and that's going to continue to persist; if it doesn't then something bad has happened in the economy.

The new startups Avelo and Breeze are going into semi-rural markets, will you have a competitive response?

I haven't studied Breeze, but I've studied their aircraft and they'll never compete with our cost structure.

Avelo is different; I have a lot of respect for those folks. They're probably more similar to us but I would think they would be the most similar to Allegiant so I'm not that concerned.

It's a big market. Take us, Spirit, Allegiant; all the LCCs combined are only 10%. If you look in Europe, they're over half. We could still triple in size without challenges for the ULCC space.

What gives you sleepless nights?

In this business you wake up every day and there's 38 things that can go wrong and some of them usually do, so you learn to live with the stress of it.

But you focus on the long-term cost is a big thing. We're paranoid as hell about costs and we'll sacrifice everything to maintain our position.

As long as you stay focused on the things that matter, the little things will work themselves out.