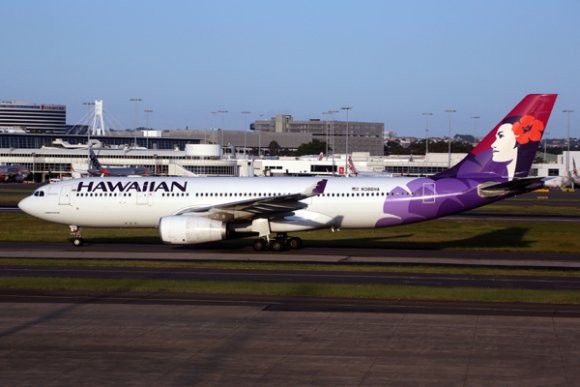 While Hawaiian Airlines continues to see a strong rebound in its domestic operations, it does not expect any recovery in its international operations until near the end of this year.
During Hawaiian’s second-quarter earnings report, the carrier said its US mainland capacity exceeded pre COVID-19 pandemic levels in June. The picture is much bleaker for its Asia-Pacific international network, however. CEO Peter Ingram said slower vaccination rates in the carrier’s main overseas markets “have thus far stunted any meaningful prospects for border reopening” in those countries.

International capacity was still at just 11% of 2019 levels in the second quarter, and passenger volume was at “low-to-mid single digits,” the carrier said. There are no meaningful international improvements expected in the third quarter, with just a few additional frequencies planned.

Japan and South Korea routes will probably be the first of Hawaiian’s international services to recover, the carrier said. This is unlikely to occur before the second half of the fourth quarter, however.

Japan in particular is a key international market for Hawaiian. The Japanese government would probably not consider easing border restrictions until after the Olympics and Paralympics are over in early September, said Brent Overbeek, senior VP for revenue management and network planning.

Hawaiian does not expect its Australia and New Zealand routes to resume until 2022, Overbeek said. However, Ingram said that traffic could rebound quickly in those markets when they do reopen.

The airline’s US mainland routes continue to go from strength to strength. But while capacity in this market returned to 2019 levels in the second quarter, average fares were down due to higher levels of competitive capacity.

Hawaiian’s domestic inter-island market was boosted by the state of Hawaii easing travel restrictions. The carrier operated 57% of its pre-pandemic capacity for flights within the state in the second quarter, although this improved to 70% in June. The carrier intends to operate 77% of its inter-island capacity in the third quarter.