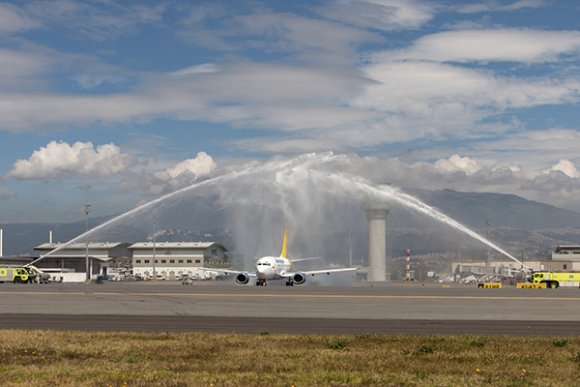 Aeroregional has inaugurated a new route between Quito (UIO), Guayaquil (GYE) and the Galapagos Islands (GPS). Flights will be twice a week on Tuesdays and Saturdays using a Boeing 737-500 aircraft with capacity for 129 passengers and a 737-400 with capacity for 145 passengers. Aeroregional becomes the third carrier to offer service between Ecuador’s capital and the Galapagos Islands.

Ryanair is further expanding its operations in Naples (NAP). The airline will station one additional aircraft at the airport this winter, taking the number based there to five. The move will enable the launch of 12 new routes to Lanzarote (1X-weekly), Agadir (2X), Bucharest (3X), Fuerteventura (2X), London Luton (7X), Milan Malpensa (21X), Prague (4X), Sofia (4X), Tenerife (3X), Tallinn (3X), Tel Aviv (6X) and Zagreb (2X). In total, Ryanair plans to offer 46 routes from NAP during winter 2021/22 with 218 weekly flights.

Riyadh’s King Khalid International (RUH) has secured the arrival of Ukrainian carrier SkyUp, which plans to start a 2X-weekly service to the Saudi Arabian city from Kyiv Borispol (KBP) on Aug. 4. The new route comes hot on the heels of flyadeal launching its maiden international flights from RUH earlier this month with service to Dubai (DXB). Air Cairo has also resumed its Cairo (CAI)-RUH service after suspending flights in January. SkyUp’s latest expansion forms part of a wider growth plan in Saudi Arabia with three other new routes set to join the airline’s network. From KBP, flights to Dammam (DMM) and Jeddah (JED) begin on Aug. 3 and 8 respectively, with a route between Lviv (LWO) and DMM launching on Aug. 5.

LCC Air Arabia Abu Dhabi is adding two routes to Pakistan. Flights from Abu Dhabi (AUH) to Faisalabad (LYP) will be 2X-weekly on Tuesdays and Thursdays, while service to Multan (MUX) will also be 2X-weekly on Mondays and Wednesdays. Both routes start on Aug. 10.

A new route between Turkey and the Philippines is being explored by Turkish Airlines. The carrier said it has decided to start operating scheduled flights to Cebu (CEB), the host of Routes Asia 2019. However, in a statement the airline said the launch would be dictated by “market conditions.” Should flights begin, Cebu would become the second point in the Philippines served by the Star Alliance member alongside Manila (MNL).

Kenya Airways has announced the launch of a new route to Mauritius (MRU). A weekly service from Nairobi’s Jomo Kenyatta International (NBO) will begin on Aug. 6. Flights will operate using Embraer E190 aircraft.

Aer Lingus will resume flights between Bristol (BRS) and Dublin (DUB) from Aug. 1. Previously operated by Aer Lingus Regional, flights will be 5X-weekly using Airbus A320 aircraft. “It is particularly exciting as the timing of the flight opens up the opportunity on Aer Lingus’ North American long haul connections to Boston, Chicago, New York (JFK) and Washington, with the added benefit of customers being able to pre-clear US Immigration and Customs in Dublin before stepping on board their transatlantic flight,” BRS CEO Dave Lees said.