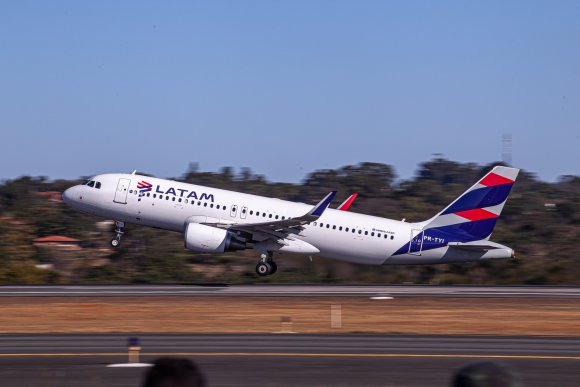 LATAM Airlines Brasil is expanding its domestic network with the launch of four new destinations from São Paulo/Guarulhos (GRU), three new points from Fortaleza (FOR), and increased frequencies on scores of other routes.

The carrier said the expansion would take the number of points it serves in Brazil to 49 by the end of the year, compared with 44 before the COVID-19 crisis began. Capacity is also scheduled to swell to 87% of pre-pandemic levels in November.

The four new destinations joining the airline’s network form GRU are all in the Northeast of Brazil. From Nov. 4, daily connections will be offered to Juazeiro do Norte (JDO), while a 5X-weekly route to Petrolina (PNZ) starts four days later.

Two more services will be launched in December, linking GRU with Jericoacoara (JJD) daily from Dec. 1 and with Vitoria da Conquista (VDC) five times per week from Dec. 8. Flights between GRU and JJD will be operated using Airbus A319 aircraft, and the three other routes will be onboard A320s.

“We are going to surpass the number of airports that we already operated across the country before this pandemic and we will continue to pay attention to all the opportunities to expand our operation to serve all those who intend to fly for leisure or for work,” LATAM Airlines Brasil sales and marketing manager Diogo Elias said.

Domestic growth is also planned from Brasília (BSB), where the carrier expects to increase the number of daily departures from 56 in August to 69 by November. The growth includes the resumption of two services that have been paused since April 2020, as well as three more routes that were cut from the airline’s network prior to that.

Flights to Porto Seguro (BPS) and Foz do Iguaçu (IGU)—which have been suspended for 16 months—will resume in November, operating 5X-weekly and 2X-weekly respectively.

Additionally, service to Navegantes (NVT) will return with five flights per week after a five-year absence, while Uberlândia (UDI) and Palmas (PMW) will also be reinstated with 3X-weekly and 5X-weekly flights respectively. BSB-UDI has been absent from LATAM Airlines Brasil’s since October 2018 and BSB-PMW has not been operated since December 2018.

A further 24 routes from BSB will also see frequency increases in November. Among them is service to Belo Horizonte (CNF), which will rise from 1X-daily to 3X-daily.

“Our resumption is a process that was already underway in a gradual manner and which we decided to accelerate because Brasília is essential to connect our entire air network in Brazil,” Elias said.

LATAM Airlines Brasil is also boosting is domestic route map from Fortaleza with the launch of three new services and the resumption of five more. The expansion will take the number of routes offered from FOR to 14.

Starting in November, the new routes will link FOR with Maceió (MCZ) 5X-weekly; a FOR-Manaus (MAO)-Porto Velho (PVH) route will be 4X-weekly; and a FOR-Belém (BEL)-Macapá (MCP) service will also be 4X-weekly.