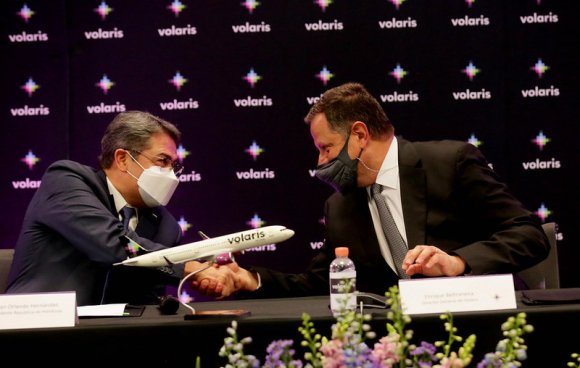 Volaris is set to enter the Honduran market later this year after the signing of a memorandum of understanding (MoU) between the Mexican carrier and the government of Honduras.

The agreement will lead to a new route being launched connecting El Salvador’s capital San Salvador and San Pedro Sula, a city of some 900,000 inhabitants located in northern Honduras.

Volaris is in the process of setting up a new subsidiary based in El Salvador, with operations expected to commence before the end of September. Speaking in late July, Beltranena said Volaris El Salvador would offer the “traffic rights to connect El Salvador more directly with the US without the use of freedoms through El Salvador, which will give us new avenues of growth in Central America.”

The carrier intends to begin flying between San Salvador (SAL) and San Pedro Sula (SAP) before the end of the year, initially offering three flights per week but with the objective of taking the route daily. It is hoped more than 150,000 passengers will use the service during its first 12 months of operation.

Volaris’ entry to the market will provide direct competition for Avianca, which currently serves SAL-SAP 1X-daily using a mix of Airbus A319s and A320s. Pre-pandemic, the Colombian flag-carrier ran up to 3X-daily flights.

The planned launch comes just weeks after the approval of a new law in Honduras that will provide incentives to airlines that establish or increase operations in the country. The "Law for the Promotion of Low Cost Air Transport" seeks to stimulate and promote air transport, facilitating access to the Honduran market and increasing tourism and business.

“We are happy to build this new Honduras with this alliance with Volaris,” President Hernández said. “Let us be allies of post-pandemic economic growth. Let us increase air traffic in the region.”

President Hernández is keen to make flying more affordable for the Honduran public and therefore increase LCC penetration, which has been historically low. Figures provided by OAG Schedules Analyser shows there are 14,296 low-cost departure seats available in August 2021, compared with 110,244 seats onboard mainline carriers.

Florida’s Spirit Airlines is currently the sole LCC offering flights to Honduras—and is in the process of expanding its network in the country. In July, the airline became the first carrier to announce flights from the US to the new Palmerola International Airport, located about 110 km (68 mi.) away from Honduran capital Tegucigalpa.

The city will become the ULCC’s second destination in Honduras alongside SAP, which it currently serves from Fort Lauderdale (FLL), Houston (IAH), New Orleans (MSY) and Orlando (MCO).

Starting Nov. 17, passengers will also be able to fly on Spirit to Tegucigalpa from FLL, IAH and Miami (MIA). Daily flights will be offered from FLL and IAH, while the route from the airline’s new MIA base will be 4X-weekly.

Palmerola International is being constructed on the site of the former Soto Cano Air Base in Comayagua. Following completion, the airport will become Tegucigalpa’s main international gateway and the existing Toncontin Airport (TGU) will handle domestic flights only.

The new airport is currently scheduled to open in October and will have the capacity to handle about 1.7 million passengers per year.

Aside from Spirit, the only other LCC to serve Honduras in recent years is Sun Country Airlines, which offered flights between its Minneapolis/St Paul (MSP) hub and Roatan from December 2020 to April 2021. The latest schedules show the route is set to return this coming December.