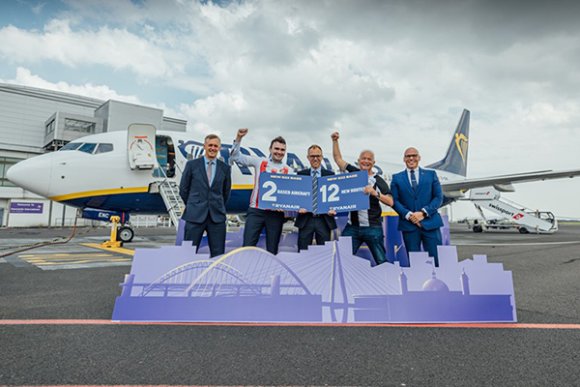 Irish LCC Ryanair said it will base two aircraft at Newcastle, England (NCL) for the 2022 summer season and fly 19 routes from the airport, including 12 new routes to start next summer.

The decision to expand its presence at NCL, from where it currently flies seven routes, came after the carrier saw “very high demand” for flights this summer from the airport in northeast England to destinations including: Alicante, Spain (ALC); Faro, Portugal (FAO); Malaga, Spain (AGP); and Palma de Mallorca, Spain (PMI).

“We are delighted to launch a new UK base, which represents a $200 million investment at Newcastle,” Ryanair CEO Eddie Wilson said. “This development will create over 60 direct jobs and offer our UK customers a host of European hotspots to choose from next summer, including popular destinations such as Paphos, Chania, Menorca, Ibiza and Zadar. We have seen massive demand for fights from Newcastle this summer as UK customers flock to the beaches of Spain and Portugal and now [passengers] will have much wider choice next summer with the addition of these 12 new routes.”

NCL CEO Nick Jones called Ryanair’s decision to expand at the airport next summer “very significant news for both the airport and the region,” adding: “Ryanair’s investment is a sign of growing confidence and will provide the [northeast England] public with a great selection of new destinations and extra weekly frequencies, providing more options for leisure and business travel. This will create new jobs for pilots, cabin crew and engineering alongside support services, and will generate economic value for the wider area.”