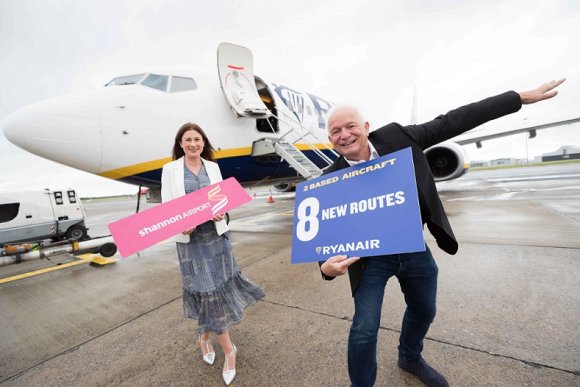 Ryanair will base a second aircraft at Shannon Airport (SNN) this winter, which the airline said would help to underpin the recovery of tourism to the southwest of Ireland.

The carrier shut its base at the airport during the winter 2020/21 season—alongside the closure of one in Cork (ORK)—but reactivated activities at SNN during the current northern summer season.

The base at ORK is yet to return, with the ULCC blaming “a lack of incentives.”

The airline is currently offering 16 routes and 36X-weekly flights from SNN, with Corfu (CFU) and Gran Canaria (LPA) added for the summer season.

In a statement announcing the base expansion at Shannon, Ryanair urged the Irish government to “urgently implement incentives to attract Ryanair and other airlines” to help restore pre-pandemic capacity at Dublin (DUB) and Cork.

Ryanair DAC CEO Eddie Wilson said airports in Ireland would “continue to lose passengers and jobs at a time when other EU countries, regions and airports are growing and recovering connectivity” unless the country’s government steps in.

Ryanair intends to fly from SNN to LTN four times per week, while BHX, BUD and EDI will receive a 2X-weekly service. FUE and TRN will each have one flight per week.

“The confirmation of 18 routes from Shannon for winter including exciting new destinations such as Budapest and Turin, is very positive news for the airport and for this region after what has been a very difficult period for the aviation industry.”